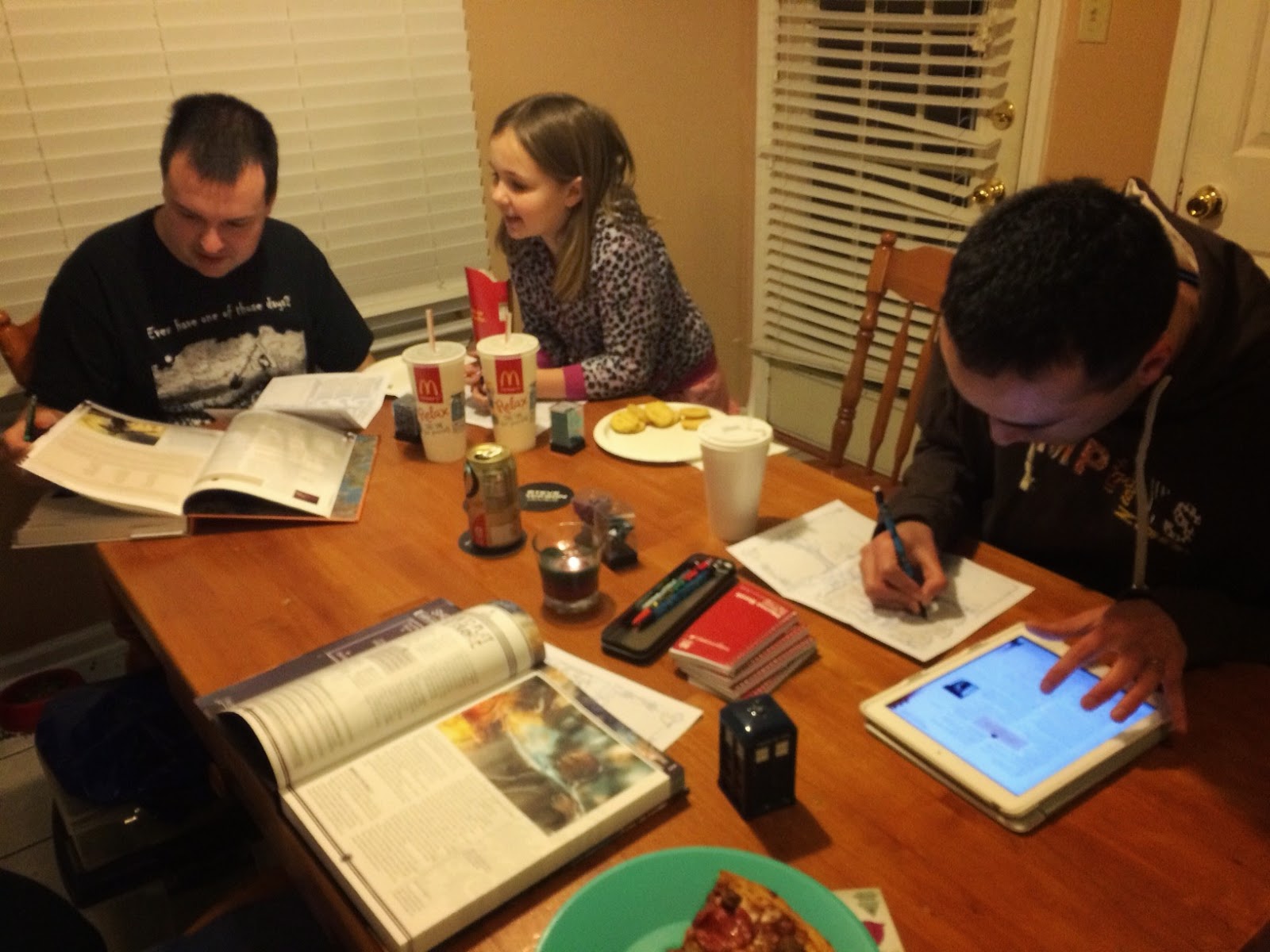 My most recent game session was my group’s introduction to Numenera. I haven’t even read the whole corebook myself, but couldn’t wait to dive in, so that’s what I did. (Plus I did read all of Numenera’s sister game, The Strange.) For this session I ran part of “The Beale of Boregal” from the Numenera corebook.

The players were Jay, Juan, and Kaitlyn (Jay’s daughter).

Before we started, the players decided their reason for being in the region was that they wanted to explore the Great Slab (one of the options suggested by the adventure).

In the adventure’s first encounter, our heroes met two young people who arrived riding on the back of a scutimorph, a giant millipede-like creature. Catastrophe and Boomshakalaka (hereafter referred to as Boom because ow my fingers) took to this idea, and wondered how hard it would be to tame one of these monsters.

The adventure assumes that the PCs will either accompany one of the NPCs toward town or follow the other back to the site of a battle. My players weren’t excited about either of these options–they were still more interested in seeing the Great Slab. (Who can blame them? It’s not just a slab, it’s a GREAT slab!) But since the battle site (a village in the False Woods) was roughly on the route toward the Great Slab, they figured they’d check it out on the way.

This let me run Encounter 2, where the PCs entered the woods full of fake trees and found that each one was home to a scutimorph.

Jackpot, thought the players. Time to practice some taming.

Boomshakalaka immediately jumped onto the back of one of the monsters. The scutimorph exuded a layer of slippery goo and easily bucked Boom off, but that didn’t even phase our glaive. Sitting in the crater caused by his fall, Boom started working his mojo on befriending the creature. (Being rugged, he is trained in animal interactions.) It didn’t work, and the scutimorph attacked. Rolling two ones in a row, Boom had his shield eaten, and was then eaten himself. 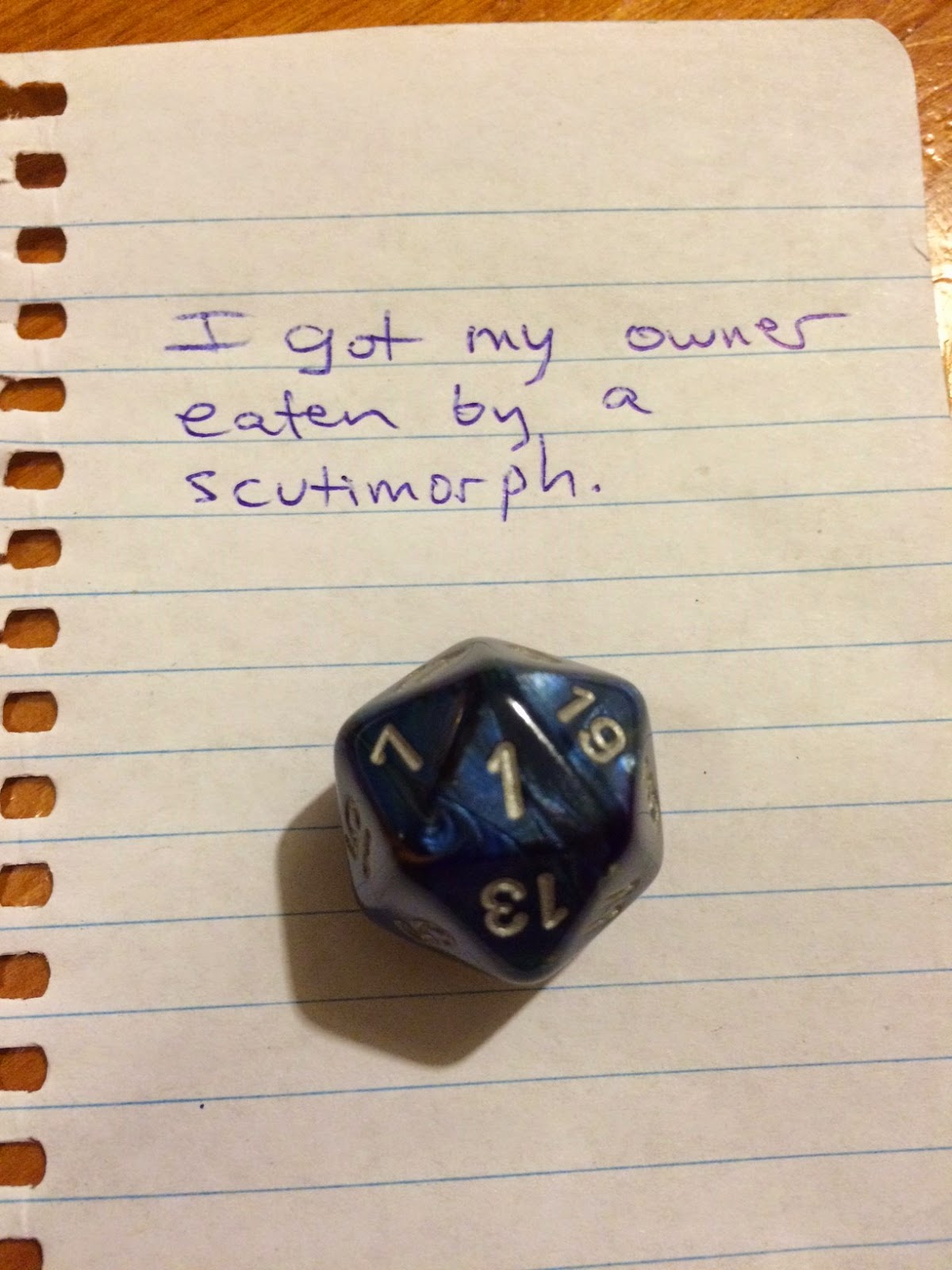 But while relaxing inside the creature, he succeeded at befriending it, and safely climbed back out of the thing’s mouth. (The rest of us were glad about this, because before befriending the scutimorph Boom had considered fighting his way out through the other end.)

The taming complete, Boom lost interest in the scutimorph and let it go free. Thanks to a goo-cleaning device that Catastrophe crafted, Boom cleaned himself up.

The party then climbed onto the mesh covering the False Woods and set out toward the Great Slab. They spotted a village down at ground level–the one the adventure would have them defend in Encounter 3–but said “fuck it” and passed it by. (Kaitlyn didn’t say “fuck it.” She’s too young.)

A pack of pallones–flying disc-creatures that are invisible when turned sideways–attacked the party soon after this (as stolen from Encounter 3). These guys drew a lot of blood from the party, except for Catastrophe, who spent most of the battle hiding inside a cooler. And even when Boom threw that cooler at the pallones, she danced away unscathed.

The party’s first use of a cypher was pretty exciting…because Sparkles fumbled and jammed his reality spike through his foot. He had intended to use it as a barrier between himself and the charging pallones. It did help out in that respect, but Sparkles found himself attached to the pallones and none of them were happy about it.

Employing a bit of teamwork, though, the party survived and defeated the pallones. Since I had described the pallone attacks as having a metallic sound when hitting something solid, the players reasoned that the pallone remains would be metal shards. This sounded like a good idea, so that’s what they found. Catastrophe crafted these shards into semi-invisible swords.

While they were resting up from this encounter (which took two recovery periods, thanks to some high damage and low recover rolling), the party heard the villagers below fighting the creatures also. Boom and Catastrophe visited the village for supplies. Catastrophe and Boom bartered off the pallone swords in exchange for food (“a feast” was Catastrophe’s demand) and leather (for more crafting). Boom talked to Lowd, the town leader, who mentioned his feeling that the cause of the creature attacks originated from the west. Boom decided not to follow up on this, joining the others in their desire to travel east to the Great Slab.

Before departing, though, Boom befriended three adolescent scutimorph to use as mounts. Sparkles’s mount took to him immediately, but it took Catastrophe two tries to make friends with hers.

The party set out on their two-day journey at scutimorph speed to the Great Slab. They camped out that night, and were attacked by “the skulking bands” from the adventure (p. 370), actually a creature called a zaelem. This time Catastrophe didn’t hide inside the cooler; she got some practice with her crossbow and clawed gauntlets. Boom was almost eaten (again), but the PCs were triumphant when Sparkles froze the creature’s back and Boom shattered it. Luckily, he had already forced the creature to regurgitate the treasure in its guts before it was shattered; this included a whopping 6 cyphers.

In Numenera, each character has a set amount of cyphers they can carry safely. Sparkles decided to keep the excess in his wagon. We’ll see if that turns out to be a wise decision.

(I forgot to inject any GM intrusions. Oops.)

Next time: to the Great Slab!