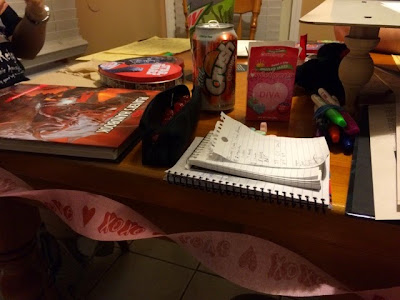 For our Valentine’s Day game session, my girlfriend suggested we decorate the place with hearts and pink banners and lovey-dovey streamers and shit, just to see what kind of reaction we’d get out of the players. 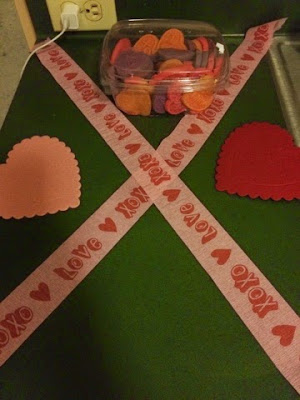 How do you like the finished product? Yeah, pretty nausea-inducing, right? That’s what Jay said. Which made my day.
In addition to the decorations, we got candy hearts for me to give out to any player who did anything especially clever or entertaining. Also, we got heart-shaped candy tins for the players, and a special prize for the player who ended up with the most candy hearts at the end of the game.
For this session, we played the first part of Episode 3 of the D&D 5th edition campaign “Hoard of the Dragon Queen.” (We took a break from Numenera because we were down two players, and it wouldn’t feel the same without Catastrophe and Boomshakalaka.)
While I don’t want to go so far as to log all of our sessions from published D&D adventures, I would like to brag about my players’ clever actions in this session. If you’re a D&D player and you plan to play this adventure, you might want to skip reading the rest of this due to possible spoilers.
The party this time was:
This episode starts with an NPC hiring the PCs to return to a site full of enemies that they scouted—and had to escape from—last time. The players were unwilling to do so for the simple reward of gold the NPC was offering. I’ve read criticism of this campaign for not offering much in the way of material rewards for the PCs, and I think that’s what the players were starting to feel here. They each had around 300 gold already from previous quests in the campaign, and nowhere to spend it (being based in a small town that had been robbed blind in Episode 1).
I don’t have the new Dungeon Master’s Guide yet, so the only source of treasure at my disposal for 5th edition was a few items in the supplemental downloadable material for the campaign. So I had the NPC offer each of the PCs his choice of a +1 weapon or +1 armor. This did the trick; the players’ eyes lit up and they agreed to the mission.
When the party returned to the camp they were to scout, they found it had been abandoned except for some hunters out front and some other forces in a cavern. Upon learning that the hunters provide food for the enemy, Dain suggested they poison the food and let that do the work of taking out the enemy. So that’s what they did—a little charcoal on the meat, plus some of Copello’s poison spray mixed in, add a dash of Copello disguising himself as one of the hunters, and they put their plan in motion.
This made me nervous, because this episode is set up as a standard dungeon crawl—enter area 1, find (or spring) some traps, fight some monsters, move to area 2, repeat. I didn’t really want the PCs to short circuit all of that and be led right to the heart of the cavern base, and yet I didn’t want to punish their creativity either. So I tried to let things happen naturally and roll with it.
I decided the guards immediately inside the cavern wouldn’t let just anyone in, even the hunters they knew provided their food. So they blocked Copello (in disguise) from passing further into the cavern, but didn’t attack him either. The PCs put their heads together and decided Copello should take the guards a plate of poisoned sandwiches. This worked; the guards ate the food and before long were making sounds of distress.
The PCs dispatched the suffering guards easily. However, before they could finish the last one, he stumbled deeper into the cavern and accidentally tripped the first trap the PCs would have encountered. (I made it fair, giving him the same chance to escape it that they would have had.) This had the further benefit (from the PCs’ perspective) of revealing a patch of camouflaged violet fungi that would have likely sneak-attacked them. The fungi instead attacked the guard, helping the PCs out even more.
I loved that all of those circumstances in the PCs’ favor had trickled down from their outside-the-box plan to poison their enemy.
The party explored a few more rooms, then found one that featured a group of kobolds and a pit containing three guard drakes. (The drakes were isolated for training purposes and couldn’t get up to the PCs unless the kobolds could manage to let them out.) On the party’s first attack, Copello fumbled his spell attack, and I went with the result that Jay suggested.
Earlier, the PCs had noticed that the ceiling of the adjacent room was covered with bats. They were stealthy enough that they didn’t disturb the creatures at the time, but Copello’s badly aimed blast landed right next to the bats and pissed them off royally. The bats turned out to be no threat at all, but among them were hiding a group of stirges, which attacked.
Since the PCs and the kobolds were close together, the stirges went for all of them. Copello was the only PC to get bit, but the kobolds were far less lucky; all but one of them were killed outright by the first attack by the stirges! Naeris noticed that the stirges that had killed the kobolds were still attached to them, slurping up their blood, so he tossed a kobold (plus stirge) down into the drake pit. The party added the other kobolds to the feeding frenzy, too, and by the end of the scene had neatly taken care of the kobolds and stirges and pacified the drakes enough that they calmed down and didn’t pay any more attention to the PCs.
Copello’s critical failure resulted in all but one kobold being slain in the same round!
That’s part of the reason his player earned the Valentine’s prize of the evening. 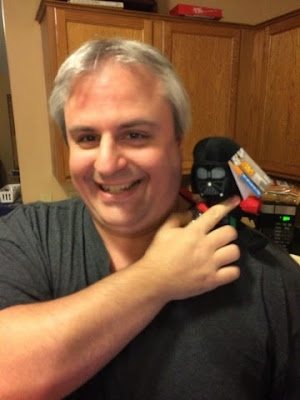