We played D&D (5th ed.) for our latest game session, getting farther into Episode 3 of “Hoard of the Dragon Queen.” (See my earlier post if you want to read about our game covering the first part of Episode 3, aka Session 4. I didn’t write about the first three sessions. Hope you’ll forgive me.)

As before, the players were:

It also turned out to be another special day for our game: it was Pi Day (3.14)! So according to Jay’s wishes, I bought pie. I meant to work pie into the events of the adventure, but it slipped my mind. Now I’m regretting that we missed out on enacting a kobold pie fight.

The PCs continued their exploration into a new room in the caverns they were exploring, which turned out to be the kobold barracks. Naeris led the way, intentionally not looking for traps. (This is because Naeris has, once or twice, taken wounds that would have killed him, yet lived. Naeris’s DM doesn’t believe in killing PCs unless it is dramatically significant, and Naeris has decided the reason he hasn’t died from such wounds is that he is immortal.)

So, Naeris triggered a trap. The ceiling above the following PC, Dain, collapsed, wounding Dain and knocking him down. The noise alerted the 5 kobolds and 5 winged kobolds in the area, all of whom attacked.

Highlights of this combat included: winged kobolds dropping rocks on the PCs from above; Naeris wondering when the winged kobolds would run out of damned rocks to drop; Copello casting web on the non-flying kobolds; Naeris botching a spear throw and lighting the web on fire; Copello putting all the flying kobolds to sleep; and Dain bisecting a kobold who tried to flee. The party eliminated the kobolds, then rested.

Moving on, the party found a shrine room dedicated to Tiamat. Here they battled Langdedrosa Cyanwrath, the lightning-breathing half-dragon that fought (and technically killed) Naeris in the campaign’s first episode. (No blog post on that one, sorry.) Another enemy was in the room at the start of combat: a barbarian ally of Cyanwrath. Copello’s quick thinking made a major difference in how this scene went down, though: he charmed the barbarian using charm person before combat started, convincing the fellow that Copello and company were his friends. It took another turn or two to convince the barbarian to turn on Cyanwrath, but turn he did. This made the fight much easier for the PCs, and they defeated Cyanwrath. He still made them work for it, though, with his dual attacks and his lightning attack that could hit several opponents. Cyanwrath’s last action was to fatally wound the barbarian. (He was NOT pleased about his barbarian ally betraying him.)

Once the fight was over, our heroes found a treasure chest. They triggered the trap protecting it (of course), survived the damage, and collected a supply of valuables, some healing potions, and a wand that is as yet unidentified.

Copello and the barbarian had a touching farewell, during which Copello asked the charmed fellow if there were any secret rooms in this joint. The barbarian said that the room to the east is a dragon hatchery, and that a concealed rope in this room leads up to a secret room. Then he coughed up blood and collapsed.

The party decided to check out the room up the rope first. Naeris led the way. The rope terminated at the underside of a rug, which Naeris threw aside. As he climbed out of the hole into a study of some sort, the room’s sole occupant (named Frulan Mondath, though I don’t think the players ever learned this) spotted him and moved to attack with her halberd.

Dain and Copello joined the fun in time to hear Mondath call for her guards. Copello immediately cast a web spell at the western doorway, immobilizing one of the six approaching guards and preventing any of them from entering.

Mondath was not at all happy that her reinforcements were cut off, and she expressed her displeasure by slamming Naeris into a wall and freezing Dain in place with a hold person spell. Copello tried to burn her with a fire bolt spell but missed, lighting the room’s large table on fire instead. Noticing that a large map and a collection of important-looking papers were lying on the table, Copello broke off from the fight to put out the fire so he could examine the documents after the fight.

Naeris recovered and put Mondath on the defensive. Copello taunted Dain about not being able to break out of his paralysis—which had the effect of pissing Dain off so much that he overpowered the spell! The finishing blow to Mondath came from the one-two punch of Dain slashing her with his greatsword and knocking Mondath into Copello’s cloud of daggers spell. All the daggers aimed themselves at Mondath and, in one smooth motion, stabbed her to death.

The party searched Mondath’s adjoining bed chamber, finding a purple cultist robe and a few items of more interesting treasure: a potion of fire giant strength, a potion of mind reading, and a dozen +1 arrows.

This is where we called it a night. 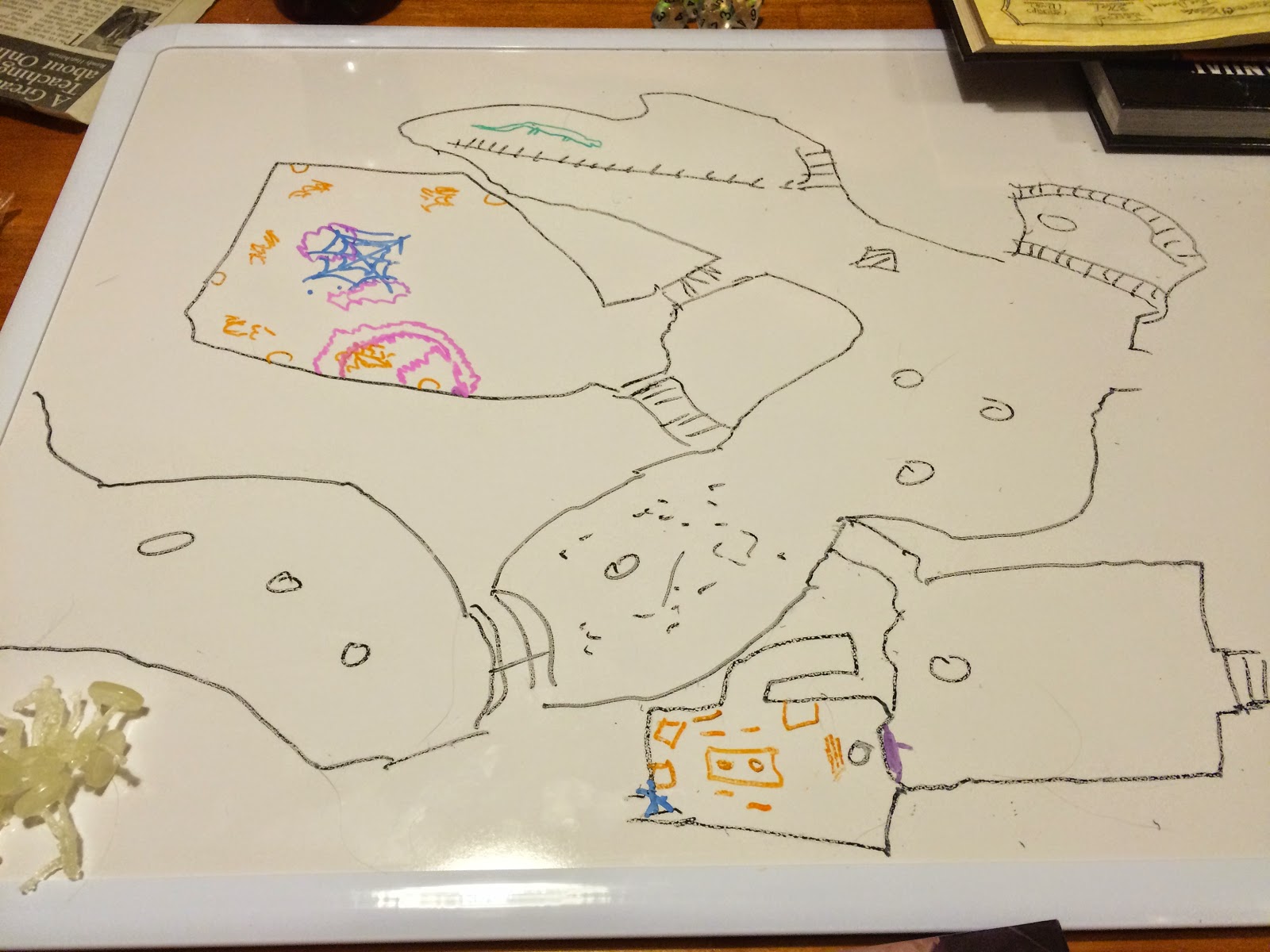 I bought the 5th edition Dungeon Master’s Guide just before this session, so I could use it to reward the players with a few cool magic items. The campaign itself is mostly lacking in useful treasures, and the players had hinted that they were getting tired of only finding gold and baubles. This new DMG is wonderful, and led to the PCs finding the wand, the potion of fire giant strength, potion of mind reading, and the +1 arrows.

FYI, Lex Starwalker has a great overview of the DMG on his podcast Game Master’s Journey, in episodes seven, nine, and eleven.

Another thing I did before this game was visit the office supply store. (I love that place.) I got a whiteboard of my very own (I’d been using Jay’s) and some index cards in a smaller size than I’d seen before. The cards turned out to be great for tracking initiative order and NPC wound levels. 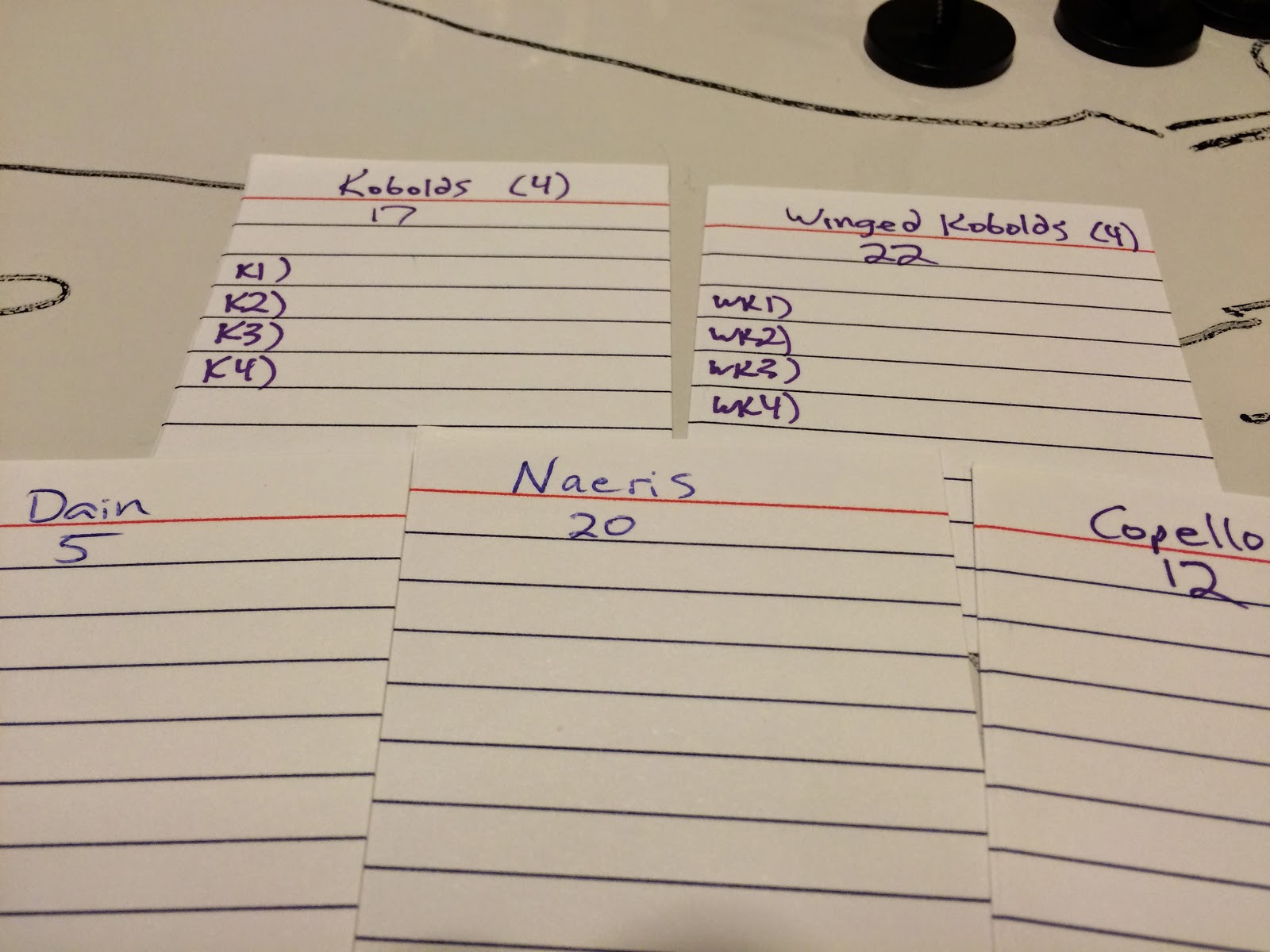 Another bit of prep I did between sessions was to print another copy of the PDF containing the campaign’s enemy stats. Then I cut out each stat block, so that during combat I could take out the ones I needed and keep them in easy view, like below. This was MUCH preferable to flipping back and forth in the printout like I’d been doing before. 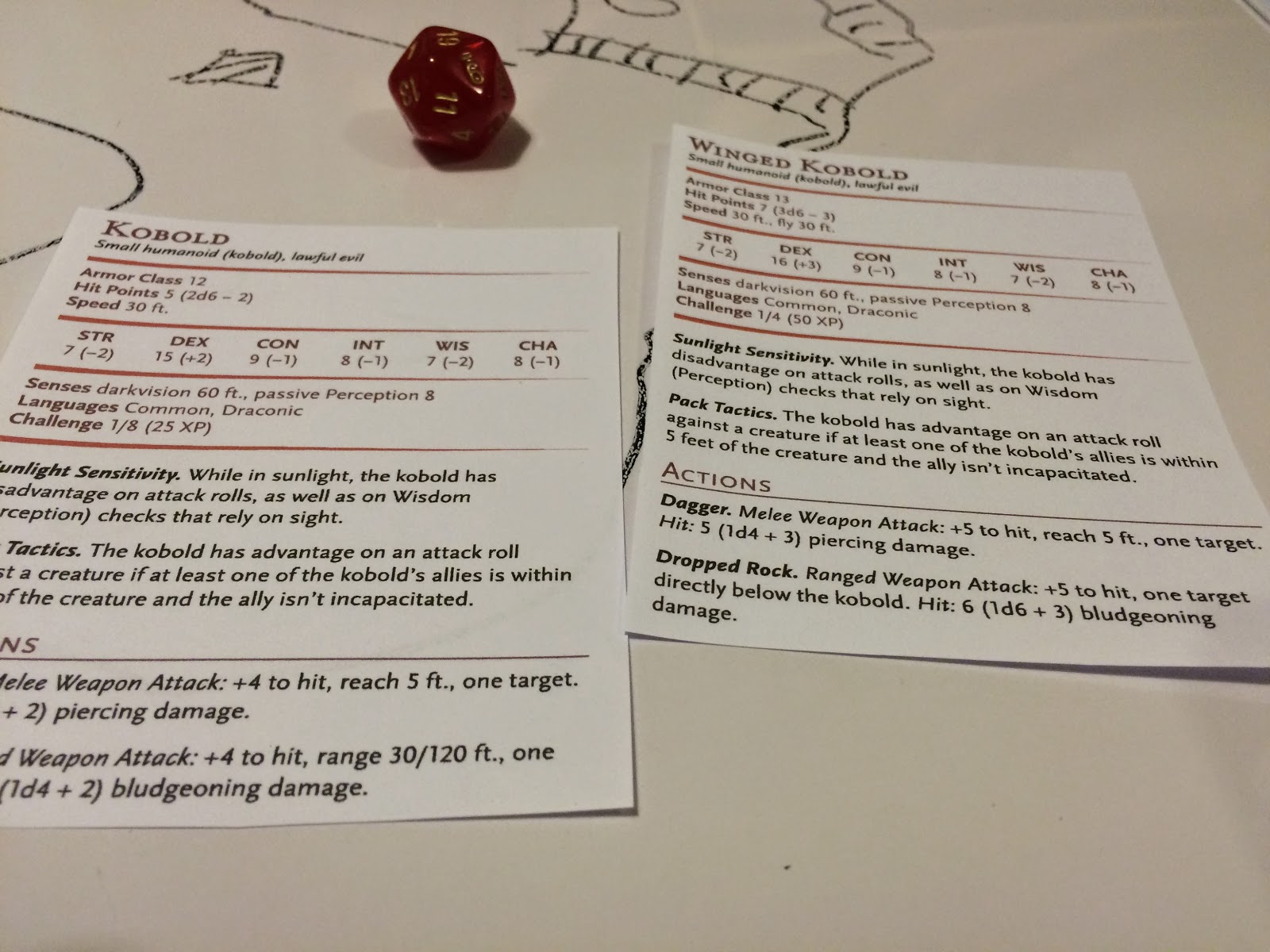 Finally, during this game I experimented with rewarding player behavior with pushes, as John Wick described in Play Dirty. Whenever a player did something entertaining or smart or in character or otherwise praiseworthy, they would earn either an inspiration die or, if they already had one of those, a push token. I like the inspiration die rule in D&D, but players can’t collect more than one of those at a time, and I wanted to be able to reward every single occurrence of great behavior. So in addition to inspiration, a push lets a player add +1 to any die roll. The players didn’t take advantage of their pushes much, so I’m considering bumping the die roll bonus up to a +1d4 or +1d6. I’m hesitant to open up unlimited inspiration dice, but that’s a possibility too.

Have you experimented with anything like this? Or have an alternate idea for how to reward player cleverness (beyond XP, of course–something immediate)? I’d love to hear about it in the comments.