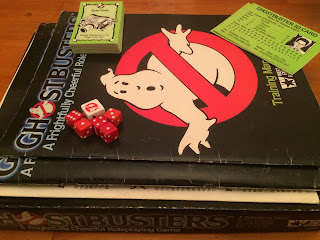 Come with me on a trip back in time. It’s 1986, two years after Ghostbusters premiered in theaters. I’m sixteen years old and shopping in the bookstore at the Mall of Memphis. (That was its name. Don’t worry, Memphis has more than one mall.) This is the same mall where I had previously bought a Ghostbusters shirt and the full set of Ghostbusters buttons. (Yep.) There, in the back of the bookstore near the magazines, I spy this boxed Ghostbusters game. 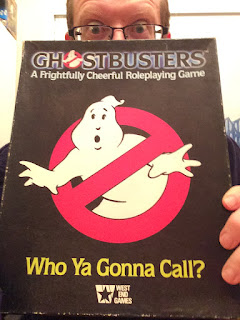 The game was called Ghostbusters: A Frightfully Cheerful Roleplaying Game, by West End Games. I had already played a few RPGs—Star Trek, Villains & Vigilantes, maybe a few others—so I knew right away that if a box said “roleplaying game” and also said “Ghostbusters,” it was something I had to have. So long, allowance!

What an amazing game this turned out to be. The game was funny, and simple, and elegant, and did a great job of capturing the spirit of the movies. (#SeeWhatIDidThere) Here are the basics:

That’s most of what you need to know to play the game! There’s more to it than that—the box is full of goodies including the dice, a player’s guide, a GM’s guide (including adventures), and some way-cool equipment cards—but most of it is gravy.

Sadly, the game is long out of print, but you can sometimes find a copy on eBay.

I didn’t realize at the time what a big deal it was to find a game with such streamlined mechanics. Not having played games like D&D or Champions or Rifts yet, I didn’t know that the relatively lightweight games I’d been playing weren’t the norm for everyone. Even so, Ghostbusters WAS the simplest of the games I’d played—yet it didn’t give me the feeling that anything was missing.

Also, this was my first exposure to West End Games, and it led me directly to one of the great loves of my life, Paranoia. Specifically, it was this bit in the introduction: “We were going to do this one straight—you know, pleasant, friendly, informal, but not too wacky—nothing like PARANOIA. But somehow we just couldn’t help ourselves.” I remember reading that and thinking, “Does this mean Paranoia might be even MORE funny than this game?” (Spoiler alert: yep.)

This 31 Days of Ghostbusters series is my love letter to Ghostbusters—part of that is the movies, of course, and the animated series and video games and board games and collectibles and more. But mostly it’s a tribute to one of the best roleplaying games ever.

I’d like to hear from you, too. Am I reaching any fellow Ghostbusters players out there?