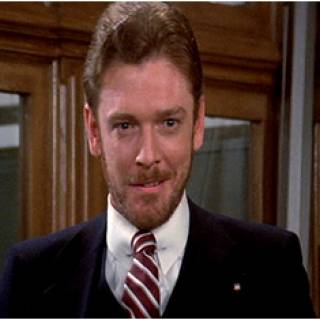 This is post number 9 in the series “31 Days of Ghostbusters,” a celebration of the franchise’s return to the big screen.

As the original film showed us, the Ghostbusters aren’t limited to supernatural enemies. In that movie, the Environmental Protection Agency, in the form of Walter Peck, served as a great foil for the team. It’s good to occasionally give the Ghostbusters an enemy other than ectoplasmic entities to fight. For one thing, spending time on conflicts other than ghosts can highlight how strange and scary the spooks are when it’s busting time again. For another, having an adversary with a human face and personality can be a refreshing change from scene after scene of shooting proton beams at slimers.

However, we don’t want to reuse old material too much, so we might want to retire the EPA as the bureaucratic bad guy. Luckily, the mortal world has no shortage of sources for authoritative asshattery. Sources such as:

“Those ghost-chasers have it so easy. No regulations to follow, no Miranda rights to read, a fraction of the arrests that we make, yet people LOVE them! They even have a cooler car!”

Police officers might resent a number of things about the Ghostbusters: their cavalier attitude toward authority, the attention they get from the public, the damage they do to the city, even the traffic laws they break on the way to a job. So maybe the PCs finish a bust and find a parking boot on the Ectomobile. Or they find themselves arrested for trapping a ghost that was related to an officer—or a judge. Getting on the bad side of the local police could cause constant trouble for the team, unless they take steps to make peace. (I won’t list any solutions here in case your players are reading, but I’ll give you a hint about one: it rhymes with “shmo-nuts.”)

“Incorporeal Americans are a living, breathing (well, not so much living and breathing) part of our national heritage, a part of our past! We must learn to coexist with them, not blast them with nuclear guns and stick them in some kind of ghost jail!”

Could zapping a spook into a trap be considered a hate crime? The members of a new group, the Ecto Rights Activists, sure think so. (They don’t like the use of the epithet “spook,” either.) ERA members are not above forming a human barrier to keep the Ghostbusters away from the scene of a haunting. Our heroes will need to deal with this problem with care to avoid looking like jerks to the public, even though most citizens don’t agree with the ERA.

“We acknowledge that these non-cohesive organisms exist; what we have yet to confirm is whether they can carry infectious agents from their habitat to ours.”

Some CDC personnel are concerned that the increase in ghost sightings is caused by a disease, perhaps spread by ectoplasm. Armed with that theory, they can be overzealous in inviting themselves to various Ghostbusters headquarters to take samples from the premises (and the Ghostbusters) to look for evidence of otherworldly infection. Smart Ghostbusters don’t let them in, but it’s more difficult to stop them from showing up at a job site, where they excel at both getting in the way and overreacting. (If you imagine a CDC lab worker in a hazmat suit chasing a slime-coated Ghostbuster so she can take him back to the lab for analysis, you’re not far off.)

“It was bad enough when these dead illegals were just taking up space in our graveyards…now they’re occupying our nation’s finest high-tech containment grids! Let’s send these spooks back where they came from!”

Many Americans, the DHS says, don’t like the idea of the Ghostbusters storing captured non-native ghosts on American territory. (Most of these Americans work for the DHS.) One especially gung ho DHC director is attempting to acquire funding to recreate the Ghostbusters’ equipment, with the goal of creating a new Office of Ecto-Immigration. (This director is not above engaging in industrial espionage to achieve that goal.) If this office does form, it will focus on identifying and trapping the ghosts of illegal immigrants, then storing them in special deportation traps.

“You say your training is in parapsychology, correct? Would you mind telling me exactly how that qualifies you to operate a weaponized positron collider?”

Some groups—such as police organizations, the Department of Homeland Security, and the Democratic Party—are demanding legislation that would require the Ghostbusters to register their weapons and license their operators. ATF is now actively looking into these options by interviewing witnesses, studying records of Ghostbuster operations, and analyzing scenes of protonic collateral damage. Because of this, individual Ghostbusters may find themselves called to Washington to give testimony about their activities. Ghostbusters R&D is against the idea of regulation, fearing that it would slow their process of releasing new equipment for the franchises to test. Ghostbusters Legal, on the other hand, is proactively developing a training and licensing program (before one is required by the government), and plans to try it out soon on a few test markets. Will this new program add a point or two of the Talent “Fire Proton Pack” for trained and licensed Ghostbusters—or will it instead take away their proton pack privileges until they pass a grueling multi-session training course?

(Thanks to Delta Green for its comprehensive list of federal agencies.)