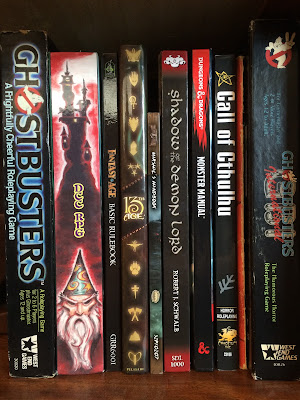 This is post number 31 (!!!) in the series “31 Days of Ghostbusters,” a celebration of the franchise’s return to the big screen.

I was curious to see the similarities and differences in the ways that other (non-Ghostbusters) RPGs present ghosts. Since game stats boil down the essence of a person or creature or idea into a finite number of descriptors, I wanted to see what the writers of different games considered the essence of a ghost to be. So I hit my gaming bookshelves in search of ghosts.

I quickly learned that I needed to come up with some kind of limiting criteria, to keep this one post from lasting forever. (Ghosts have that kind of time; I don’t!) So I focused on ghosts that are the incorporeal spirits of people (i.e. no skeletons, severed hands, or animated furniture, even though these would be at home in a Ghostbusters game). I also avoided games that I’ve talked about earlier this month, including the Cypher System and the games related to Ghostbusters.

All the games discussed below cover the basics: ghosts don’t need to breathe, eat, or sleep and they can pass through material objects. Most can fly, and are only vulnerable to energy and/or magic attacks.

I’ll go ahead and list the similarities I noticed now, so if that’s all you care about you don’t have to read each entry or scroll all the way to the bottom.

These are the themes related to ghosts that appeared in multiple games:

Those are the similarities in ghostly presentation across games. To see the differences, read on!

Ghosts in 7th Sea are described as “lingering spirits of the departed” who look just like they did when they died. They have the interesting ability to interfere with the use of magic nearby. Another interesting note is that some people have managed to catch ghosts in mirrors. Bravo, swashbuckling Ghostbusters!

The wraith in 13th Age is a basic ghost. Some recall a bit of their former lives, but they don’t care enough about that to alter their goal of draining life from the living. Abilities: an ice-cold ghost blade that deals negative energy damage and a life-drain ability that lets the wraith heal some damage when it scores a precision hit on a foe.

A Call of Cthulhu Keeper is urged to tailor each ghost to the current scenario. The game provides some basic ghostly abilities (including a POW attack against an Investigator’s own POW, and a telekinesis attack), but leaves most of the ghostly trappings up to the Keeper depending on the needs of the specific ghost story. Other general ghostly features in Call of Cthulhu: ghosts only have mental stats; they’re tied to either a location or an object; and they can be laid to rest by various methods, including destroying the item to which it’s fettered, destroying the ghost’s physical remains, excorcising the spirit, or fulfilling its mission.

This game has plenty of critters that Weird West Ghostbusters would be hired to bust, but as I said in the introduction, we’re focusing on incorporeal spirits of the dead here. Still, that gives us several varmints to consider.

Ghost: The Deadlands ghost is a template the GM is encouraged to customize, and the game mentions that you could use it to represent numerous types of ghosts. The ghost variant list includes poltergeists (they throw things), shades (tied to a people or places), and phantoms (who are frenzied killers). Abilities: chill attack, terrify attack, invisibility, create nightmares, and create a storm of small objects.

Weeping Widows: This is the spirit of a woman who died soon after witnessing a family member’s violent death. The spirit is tied to the physical world by both sorrow and anger. A weeping widow operates by possessing a woman near the area of her death. You’ll know a weeping widow when you see one because of her funereal clothing, veil over the face, handkerchief in hand, and, of course, the weeping. Abilities: acid tears, possession, and invulnerable to the type of weapon used to kill the widow’s loved one.

Will o’ the Wisp: Deadlands says these MAY be the spirits of people killed by quicksand, mining accidents, or other such mishaps. They like to lure people into danger and then “feast on the pain and suffering” that results. Abilities: mentally control a mortal into wandering toward danger.

Ghosts in DCC retain their final emotional state in addition to their final appearance, and this is why they often attack—they are still angry or terrified or whatever they were feeling at the awful moment of death. Resolving a ghost’s unfinished business can banish it, earning the characters +1 Luck in addition to the experience point award for defeating the ghost. The DCC ghost features two tables to roll on (gotta love DCC’s tables!), including the spook’s “rest condition” and special abilities. The rest condition is what it will take to appease the ghost, such as killing its murderer or completing a mission it was undertaking when it died. The special ability table includes the following possibilities (and the ghost gets 1d4 of them): horrifying appearance, chains, banshee scream, paralyzing touch, imparting a vision of death, bestowing a boon, turning invisible, draining attributes, possession, and telekinesis.

In addition to the basic ghost, the Dungeons and Dragons Monster Manual (5th Edition) includes a few other standard types of nonphysical apparitions.

Banshee: In D&D, banshees are the spirits of female elves who used their beauty to control others rather than for more positive purposes. A banshee is bound to the place of its death. It covets items of beauty such as artwork and jewelry, though it hates mirrored surfaces because they serve as reminders of the banshee’s own wasted beauty. Abilities include detecting life, causing terror, dealing necrotic damage, and wailing (for psychic damage and a possibility of instant knockout).

Ghost: The ghost is differentiated from the other apparition types by the fact that it has unfinished business in the mortal realm. Players who learn about a ghost’s business (get your mind out of the gutter) can use it to get rid of the ghost, or use its weakness against it. I like the description of “ghostly manifestations,” or ways that the Dungeon Master can evoke a mood by describing unnatural silences, cold spots, or a strange stench. Abilities: causing terror, dealing necrotic damage, possession.

Specter: This is presented as an angry spirit that’s no longer connected to who it was in life. Specters are jealous and hateful of the living. They have a weakness to sunlight, and the ability to drain life. A variant of the specter, the poltergeist, is characterized by confusion, having no memory of how it died. The poltergeist can turn invisible, strike with ghostly force, and hurl targets with telekinesis.

Will-o’-Wisp: These are the evil souls of those who died an anguished death in a place filled with magic, especially battlefields. They operate by luring individuals to their deaths. Abilities: invisibility, illumination, lightning damage, and the nasty ability to heal itself by killing a nearby downed character.

Wraith: Described as “malice incarnate,” a wraith is the soul of a humanoid who was either corrupt or made a pact with an evil entity. It might still have a few memories of its former life. Abilities: drain life (like the specter), create specters. Weakness: sensitive to sunlight.

Dungeon World’s brief ghost entry emphasizes the “disappointment” that ghosts are left with. It also mentions the possibility of people helping ghosts achieve their final rest. Abilities: phantom touch (deals damage), terrify, and “offer information from the other side, at a price.”

Spectres (also my preferred spelling—thanks Fantasy Age!) represent any kind of ghostly entity in Fantasy Age. They are evil and like attacking the living. The entry notes that spectres of powerful individuals can have additional powers. Abilities: chilling touch (deals damage), terrify.

One of the archetypes a player can choose from in Feng Shui 2 is the ghost, which is described as a strong-willed spirit that is unwilling to pass on from the mortal world due to some unfinished business. Abilities: chi blast and love potion attack, in addition to having traditional ghost abilities (intangibility, flight, and ignoring damage from guns). And since they are player characters, ghosts can add new abilities as they level up, including sorcery powers, regeneration, and mimicry.

Ghosts can take a variety of forms, including human, nonhuman, and even objects. Their goal is to scare or annoy humans, not usually intending to harm or kill them. Magical characters can sometimes detect ghosts. As a subtype of ghosts, poltergeists exist in a particular place, use telekinesis to move and throw objects, and enjoy bugging humans.

This bad boy packs several ghosts—and none of them are called “ghost.” They are:

Phantom: This is the soul of someone who had a strong personality, died suddenly, and had unfinished business. Abilities: terrify attack, invisibility, phantom weapon.

Poltergeist: These spirits resent the living and fear losing their mortal identities. They haunt a specific location and try to drive people away. Abilities: terrify attack, invisibility, telekinetic strike, and throwing objects telekinetically.

Shadow: Souls of individuals corrupted by the game’s titular Demon Lord become shadows. They hate life and enjoy feeding on the living. Some shadows take human shapes, but others prefer simple or even monstrous forms. Abilities: terrify attack, invisibility, draining touch (deals damage, plus a chance of corruption or turning the target into a shadow).

Wraith: These are souls from Hell that made their way through to the material world to share some evil with the mortals. Wraiths are burned by sunlight. Abilities: terrify attack, shadow blade weapon (which also has a chance to turn the target into a wraith).

Did I miss a cool ghost in another RPG? If so, please educate me!