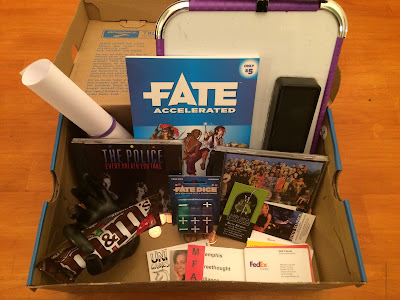 You may have heard about a new game coming from Monte Cook Games called Invisible Sun. (If you read my blog posts, then you definitely heard me mention it.) It’s a surreal tabletop RPG set for release in 2017, with a Kickstarter running right now. The game is clearly designed as a deluxe product: it’s shipping in a big fancy black box; it comes with props such as dice, cards, tokens, a game board, and a statue of a hand; some players will receive physical notes and mementos in the mail; and the sale price is nearly $200—at the entry level.

Some players may balk at that premium price tag. To those players I say…let’s make our own surreal gaming experience for just a few bucks! We’ll even go the extra step of providing both deluxe and basic level product options, where possible.

In sticking with our cheapskate theme, I didn’t want to spend too much time coming up with a great title for our inexpensive masterpiece, so I just looked for inspiration from the same source that provided the title “Invisible Sun.”

Now let’s choose a game system. We need an inexpensive RPG that we can use to craft surreal adventures for Roxanne. Let’s go with Fate Accelerated, the condensed version of the popular and versatile Fate Core system. I believe this is especially appropriate because, just as Invisible Sun will be related-to-but-not-quite Cypher System, Fate Accelerated is related-to-but-not-quite Fate Core. 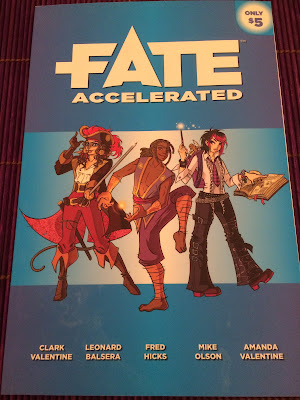 Fate games use something called aspects, which are phrases that emphasize something special about a person, object, place, or whatever. For example, a character in a science fiction game might have the aspect “Upholds the Prime Directive…Usually.” We can use this concept to crank up the surreality of our game. With that in mind, here’s a list of surreal aspects you can use.

Now Roxanne needs an introductory adventure. This is easy! We’ll just pick a song with surreal lyrics and convert it to a loose narrative. Such as:

The PCs begin in a boat, on a river. As they float through a weird landscape featuring tangerine trees and marmalade skies, somebody calls them. It turns out to be a girl with kaleidoscope eyes. She’s in danger, and something pulls her out of sight into the tangerine trees. If the PCs follow her, they pass through cellophane flowers of yellow and green that tower over their heads. Then they spot the girl again, this time with the sun in her eyes. Before they can interact with her much, she’s pulled away again!

The trail then leads to a bridge by a fountain, where rocking horse people eat marshmallow pies. Other people are around this time, and they all smile as the PCs drift past the flowers–flowers that grow so incredibly high. Nobody acknowledges any questions about the missing girl; all they do is offer to share their pies. (Any PCs consuming pie must roll to resist its psychotropic effects.)

Eventually, newspaper taxis appear on the shore, waiting to take the PCs away. If the PCs wish, they can climb in the back. The newspaper taxis lift out of the river and launch into the sky, and soon the PCs’ heads are in the clouds, as they are gone from the tangerine tree forest. During flight, one of the newspaper taxis starts to lose altitude, and the PCs must find a way to repair it to avoid a crash.

After a psychedelic flight, the PCs land in a train station in the clouds (and their newspaper taxis are now train cars). Plasticine porters with looking glass ties greet them as they disembark–and then they attack! After defeating the plasticine porters, the PCs find a trail of diamonds leading past a turnstile and to a room holding a familiar looking captive: the girl with kaleidoscope eyes. (Her name is Lucy.) Award XP!

(I admit that this adventure isn’t strong on providing player agency, but if your players are stoned they’ll have a blast anyway.)

Deluxe Cost: $13 for the CD of the Beatles’ Sgt. Pepper’s Lonely Hearts Club Band album, containing “Lucy in the Sky With Diamonds” (used above) and 13 other adventure seeds
Basic Cost: $0 for text provided above (you’re welcome)

Invisible Sun will ship in a massive, elaborate, black box. I mean, check this out: 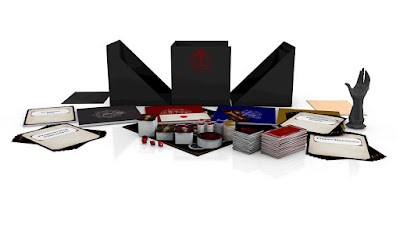 To cut costs, the box we use for Roxanne will need to be more humble. Wait, scratch that–let’s say our box will be more eco-friendly…because we’re going to recycle whatever box we have lying around the house! If possible, make it something surreal, to fit in with our game’s theme. Take the box I’ve chosen, for example. Who would expect a roleplaying game to emerge from…a shoe box! 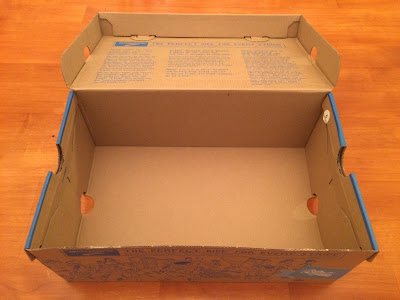 Our box only needs to be big enough to hold our cheap budget game contents, so this should be a good fit. If you want a fancier box, or can’t find a shoe box lying around the house, you can buy a cardboard or plastic box pretty cheap.

Deluxe Cost: $1.89 for transparent shoe box from the Container Store
Basic Cost: $0 for cardboard shoe box you have in your closet right now

Next we’ll see the items that need to fit in our awesome box.

Invisible Sun will come with lots of fancy bits and bobs, including special dice, multiple types of cards, tokens, and a game board. Let’s see how we’ll provide these amenities for Roxanne on the cheap.

Roxanne’s specialty dice will be Fate dice, made specifically for the Fate system (and Fudge system). At the budget level, just download the free Fate dice roller app. You could also, of course, repurpose 6-sided dice you already have sitting around. 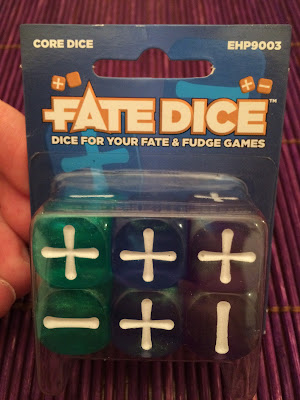 Deluxe Cost: $15 for Fate Core dice
Basic Cost: $0 for Fate dice roller app, or dice you borrow from another game

Similar to the dice category, we can buy cards made for Fate called the Deck of Fate. In addition to providing die roll results on most of the cards (thus providing another cost-cutting measure, since you can skip the dice if you want), the Fate cards provide a bunch of images and symbols you can use to spark your imagination during a game of Roxanne. (“You drew a moon? Hmm. You are suddenly buried in green cheese.”)

A cheaper option is the Deck of Fate app; it’s not free, but it’s under $3. If that’s still asking too much, then do what I do and use your own collection of business cards. What could be more surreal than the surprise appearance of a plumber? For added weirdness, combine two cards, and delight the players by letting them confront bizarre allies and adversaries, such as a gastroenterologist who cuts hair. 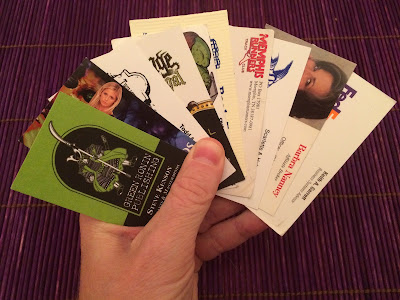 Invisible Sun will include “more than 100 tokens of different types to use for the different kinds of player rewards, Vance spell management, and more” (as explained in MCG’s All the Components page). We don’t yet know what all that means, but in the meantime we can include some tokens in Roxanne to use as Fate points or whatever else we can think of. On the cheap end, I’m using something easy to find and almost completely worthless: pennies. If you want to upgrade to Roxanne Deluxe, pay a buck and use a gamer staple and my favorite form of tokens: M&Ms. 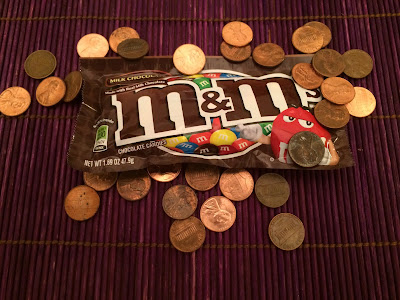 While Invisible Sun boasts a game board, a cloth map, AND a poster map, Roxanne is going to need to cut corners. I mean multi-task! We’ll use a single component that can serve as both a game board and any kind of map you need. At the deluxe level, this is a small dry erase board. (It has infinite possibilities!) At the basic level, just use a sheet of paper. (It still has infinite possibilities! If you don’t erase too hard.) 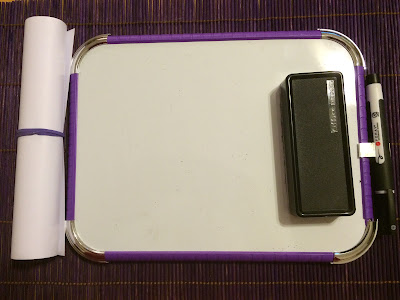 Invisible Sun features a funky statue of a 6-fingered hand, called the Testament of Suns. It’s described as “an imposing resin sculpture that holds a Sooth card that is active long-term for all to see.” That’s cool, and kinda freaky, but we can match it. Behold this jewelry display hand I got on Amazon to display my Green Lantern rings. With a little help, it holds a business card game card. If this is too rich for your blood, you can just draft a friend or relative into holding a card up for you while you play Roxanne.

Deluxe Cost: $8
Basic Cost: $0 (depending on the availability of a sucker)

Yikes, this one will be hard to match. The Invisible Sun Directed Campaign is an experience that the high-end purchasers unlock, in which players receive customized game material from Monte Cook Games for a year. “This includes adventure material, campaign advice, handouts, props, and special physical items. It’s like Monte himself is your GM coach, providing step-by-step advice and aids for your campaign as you run it. We’ll even send your players intriguing mystery packages tied to the campaign that are keyed to their character.” (Source: Invisible Sun Kickstarter page.)

OK, no sweat, we can do this. We just need an envelope, something symbolic or unexpected to put in it, and a customized note for your player. A craft store will be your friend when executing your own directed campaign for Roxanne. 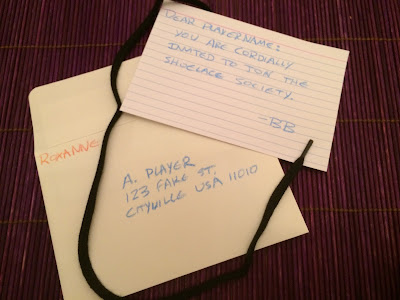 Here’s the final price tally. Roxanne Deluxe costs $72.89 (not including tax, shipping, and the ever-important handling), and Roxanne Basic will run us $4.30. Booya! I am going to pronounce our budget-saving efforts a success, and our new game–Roxanne–complete. I look forward to seeing your playtest reports, convention anecdotes, and actual play videos start to roll in. To answer your next question, yes, I’ll be happy to sign your shoebox.

I hope it’s obvious that I’m only teasing my friends at Monte Cook Games. I’m a proud backer of Invisible Sun, I’ve been excited about it since I saw the announcement at Gen Con this year, and I can’t wait to try it out!

(The adventure inspiration was, of course, “Lucy in the Sky With Diamonds” by the Beatles. Can you think of other songs with lyrics that would make for a surreal adventure?)