Similar to what they did for Numenera in late 2014, Monte Cook Games has launched a Kickstarter to fund a deluxe box set for their RPG “The Strange.” It’s the same content as the original game, just repackaged and put into an attractive box with some extra goodies. 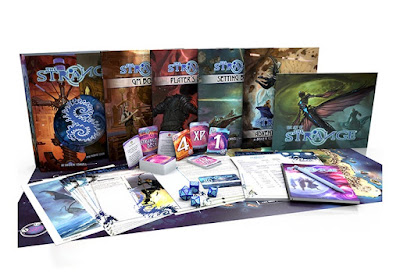 My favorite thing about this is the way it breaks out the core rulebook into four specialized books: the Player’s Book, GM Book, Setting Book, and Adventure Book. Perfect for sharing! Also for carrying only the section of rules I’m currently studying in my backpack, for when I’m creating at lunchtime.

As is usual for a Monte Cook Games Kickstarter, the stretch goals have already added a lot of value to the project. Here are some highlights:

I’m in! This Kickstarter closes on March 17.

A Strange Box on Kickstarter