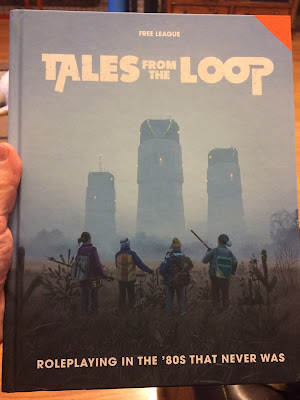 Tales From the Loop is a roleplaying game set in an “80s that never was.” And I like it so much that I’m going to write something about it every day this month.

The game is inspired by the paintings of Simon Stålenhag, who depicted realistic scenes of an alternate Swedish suburbia in the 1980s. Stålenhag’s art featured robots, dinosaurs, giant floating vehicles, and other weirdness alongside Swedish scenery and curious kids. In 2014, Stålenhag’s art saw print in the Tales From the Loop art book (2015 for the English version). A second art book, Things from the Flood, followed in 2016.

In November 2016, the art books’ publisher, Fria Ligan (Free League), launched their Kickstarter project for the roleplaying game set in the world Stålenhag created. This is when I first found out about all this coolness, and jumped on board immediately. At the time, I thought it was inspired by Stranger Things, not realizing Tales From the Loop predated that show! But it IS certainly inspired by E.T., and Goonies, and similar 80s-era movies and shows featuring plucky kids.

The game started shipping in April 2017. My copy arrived on April 24th. (That’s my copy in the photo up top!) I was only a few pages in when I fell in love with the book, and realized I needed to tell the world about it, whether they wanted to hear it or not!

In Tales from the Loop, players take the roles of Kids aged 10-15, living in a town that contains a giant underground particle accelerator. The default setting of the game is the Swedish Mälaren Islands, but the book also details an alternate American setting, Boulder City, Nevada.

The game’s rule system is a simple one, based on another Free League game called Mutant: Year Zero. Players roll a number of 6-sided dice equal to the value of an attribute plus a skill that are appropriate to what they’re attempting, and any 6 rolled counts as a success. (Usually only one success is needed.) The game also includes ways to re-roll failures in interesting ways.

When creating your Kid, you’ll start with an archetype (such as Bookworm or Weirdo) and customize it. Some of the ways you’ll make your Kid unique are your Iconic Item (such as a boom box), your Problem (e.g. unrequited love), your Drive (e.g. motivated by thrills), your Pride (e.g. I’m the smartest kid in school), your relationships to other Kids and NPCs, and your Anchor (such as your parents or science teacher).

(I’ll talk more about options for playing your Kid later in this series.)

In addition to the rules and setting info, the book has tips on creating Mysteries (the game’s name for adventures), four complete Mystery Stories, and a Mystery Landscape—a mini-setting useful for sandbox play without a predefined plot. Also, on page 185, you’ll find my name as a backer. (If you meet me at a con or something I’ll autograph that page for you.)

Some of the things I plan to talk about this month include music that would be great to play in the background during a game; how to host a killer Tales from the Loop game party; 80s-era info like fashions and slang; adventure ideas, and more. If you have something specific you’d like me to talk about, let me know in the comments!