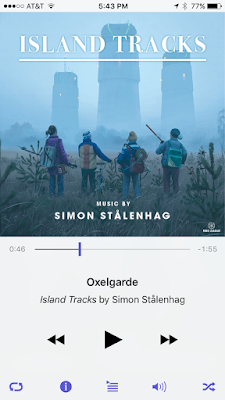 This is post number 5 in the series “30 Days of Tales from the Loop,” a celebration of the game set in an 80s that never was.

Island Tracks is an album composed by Simon Stålenhag himself, the artist who created Tales from the Loop. The album was a Kickstarter stretch goal, consisting of “eight ambient tracks, recorded using synthesizer and piano.”

As I like to do here sometimes, now I’ll give a brief description of each of the tracks on the album, along with recommendations for how you might use each as background music during a game.

If you like this album, check out more of his music on Simon’s SoundCloud site.

FYI, I know I could ask someone what the track titles mean, but I thought you might enjoy it more if I try to puzzle them out myself. Here we go!

Hey, you know what it took me this long to realize? That all these place names from islands on Lake Mälaren are the reason for the album’s title, Island Tracks.

(In my defense, I never claimed to have a Rubik’s Cube-solving level of intellect.)