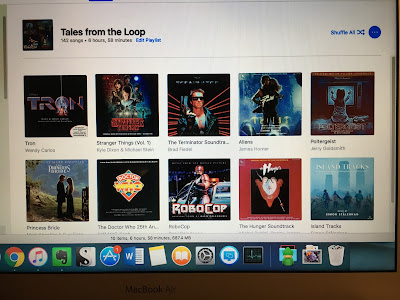 This is post number 14 in the series “30 Days of Tales from the Loop,” a celebration of the game set in an 80s that never was.

I always play music in the background when I run a game, and in a Tales from the Loop game this seems especially appropriate. In addition to using some great instrumentals from period movies, the 80s setting demands we throw in some songs from the decade of totally bodacious tunes.

My instrumental playlist (pictured above) is the one I use for general background accompaniment, as I’ve been describing in my Gaming Soundtracks posts. (See the ones I did for Island Tracks and Stranger Things.) I’ve also added the E.T. and Goonies soundtracks since taking that photo.

More specific to this game, I’ve started making playlists to represent each Kid. My plan is to occasionally switch to one of these playlists when I start an Everyday Life scene featuring a single Kid, to give that Kid a unique, signature soundtrack.

(In the first session of my game, after the players all announced their Kids’ favorite songs, I quickly downloaded them all and added them to each Kid’s playlist. Then I used these songs when we met each Kid in their introductory scenes.)

Here are the initial Type-based playlists I came up with (assisted tremendously by my wife!). I plan to expand them over time.

I’d love to hear your ideas for songs that you think fit any of the character Types, or music that would be good in a general Tales from the Loop soundtrack. Please share in the comments!