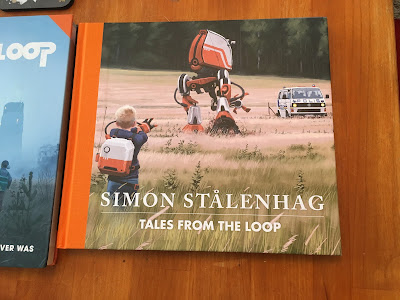 This is post number 18 in the series “30 Days of Tales from the Loop,” a celebration of the game set in an 80s that never was.

There are a few other books I’d like to bring to the attention of my fellow Tales from the Loop fans. Some are other 80s-related roleplaying games, while others are not, but are still relevant in some way.

Beyond the Silver Scream by Forrest Aguirre is a Dungeon Crawl Classics adventure in which the PCs are high school kids in the 70s or 80s. The adventure starts in a movie theater and moves on to weirder places from there. I bought this at Gen Con 2016 (because games where you play as 80s kids are an easy sell for me), and I like the simple but fun details that go into making your zero-level kid.

Cartoon Action Hour is a game of 80s Saturday-morning-cartoon action. The game uses “cartoon logic” as its foundation and de-emphasizes violence. Cartoon Action Hour’s publisher, Spectrum Games, also sells separate series books, each containing a new setting. One of these books, Punk Rock Saves the World, was written by the author who wrote Tales from the Loop’s American setting: Matt Forbeck.

Rememorex is the first Kickstarter project by Nerdy City, and bills itself as “the tabletop role-playing game of suburban ’80s horror.” The Kickstarter has reached its funding goal and (as of today, June 18) it has 13 days remaining. The game’s Kickstarter page says that Rememorex will use a simple, streamlined system and include three new mechanics called “the Tracking Error, the Clip Show, and the Montage.” I’m a backer, and I’m looking forward to seeing how this game comes out, which is expected to be around January 2018. 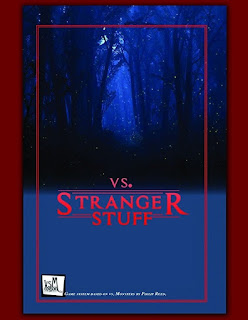 vs Stranger Stuff is a Stranger Things tribute by Fat Goblin Games, using the VsM Engine by Phillip Reed. Like Fat Goblin’s previous VsM game, vs Ghosts (which I mentioned during Ghostbusters month last year), vs Stranger Stuff is a short, rules-light game designed to evoke the feel of its source material while avoiding a lot of complex mechanics. The publisher offers several short adventures for the game, including one set at Christmas and one featuring creepy clowns.

The Tales from the Loop art book by Simon Stålenhag is the book that led directly to the roleplaying game, so you should not be surprised to see beautiful depictions of Swedish landscapes, robots, dinosaurs, cooling towers, and 80s Kids. Many of the full-page art spreads are accompanied by anecdotes that give some details about what’s going on in the images—and all of these narratives are compelling and  evocative and make you want more.

Designers & Dragons: The 80s is book two of Shannon Appelcline’s four-volume set containing a detailed summary of the tabletop roleplaying hobby. Even if your Bookworm doesn’t need such  in-depth details about what was happening at her favorite publisher at the time, you as a player or GM will probably enjoy this overview of game releases and some of the drama that went on behind the scenes.

Do you know of a Tales from the Loop-adjacent book or game I haven’t mentioned here? Let me know in the comments.