Hey, I contributed to another RPG book, and now that it’s out I figured I should tell you about it.

Twenty-eight new fantasy gods arranged in three new Pantheons for your 5E game. Gods with passions, backstories, and agendas. So much more than a list of names and domains.

The people who followed the Old Gods was conquered by the those that followed the Thirsty Gods, who in turn were displaced by those following the Bright Gods. Yet all three pantheons still have followers, and coexist in an uneasy peace.

New domains and other character options that work with these new gods, some for everyone, and others focusing on clerics, druids, paladins, and rangers. And new magic items, new creatures, and more!

Plus, an exciting new faction system that gives players a voice as to which factions take a hand in your campaign.

A print edition is coming soon, in hardcover and softcover. You can read more about the book at its Kickstarter page.

The Gods Have Spoken [DriveThruRPG] 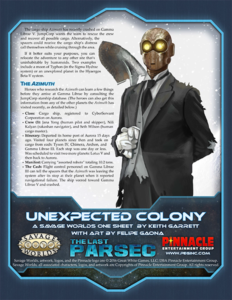 Pinnacle Entertainment Group just released a One Sheet Adventure I wrote for their Last Parsec setting. And it’s free! Here are more details, from Pinnacle’s announcement:

How did that elephant get in my refrigerator? When did I grow extra toes? Where did that settlement come from? All three of these questions are things you don’t really expect to ask yourself, but at least one of them will come up in Unexpected Colony—the new One Sheet Adventure written by Keith Garrett for The Last Parsec.

When you answer the distress call of the downed cargo ship Azimuth, you were expecting a simple rescue and recovery. When has space ever been simple?

Like most all of our One Sheet Adventures, Unexpected Colony is good for a quick adventure, easy to expand to a larger timeline, ready to be inserted into an ongoing game, or a good spot to start a campaign. Like absolutely all of our One Sheets, it’s also free! Grab it while the bits are still fresh! 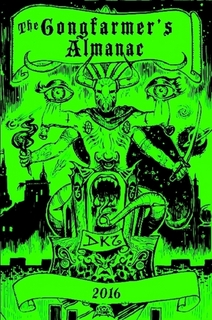 I contributed to a community RPG project last year, and now that it’s available to the public, I can tell you where to find it!

The Gongfarmer’s Almanac 2016 is a fanzine-style publication for (and by) fans of the Dungeon Crawl Classics RPG. All the writing, artwork, layout, and editing was done by members of the DCC RPG Google+ Community. This is the second year the team has done this; last year’s Almanac spanned six volumes, and this year we pushed forward to eight.

In addition to editing, I wrote three pieces for the Almanac this year. They are: Random Tavern Generator (Volume 1), Fantasy Food Generator (also Volume 1), and d50 Fantasy Foods (Volume 8).

You can download all volumes of Gongfarmer’s Almanac 2016 from the community’s Google Drive links below. If you want to order the Almanac in print, you can get the whole shebang in one volume from Lulu (pricing is at-cost, simply covering materials and shipping).

The 2015 Gongfarmer’s Almanac is also still available, both in print and PDF. (Here are the PDFs for Volumes 1-5, and here’s the one for Volume 6.)