I recently mentioned the Monte Cook Games kickstarter “Worlds of the Cypher System” (expiring soon!) and its Gods of the Fall setting. Another of the three included settings is Predation, by Shanna Germain:

An asteroid will soon wipe out all life on earth. You know this—and you know when—because it’s in the history books your grandparents brought back to the Cretaceous period with them. Now your small society is trapped in prehistory, desperate to find a way back to your time. But at least you’re not alone. You have tech, weapons, vehicles, and science from the future—you even have the ability to bioengineer the dinosaurs around you. Can you use these tools to survive a dangerous world on the brink of extinction?

Is that the sound of thunder you hear? 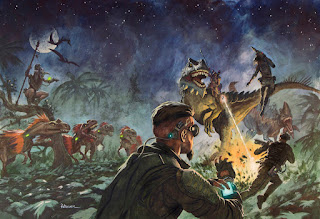 I know, so much potential, right? Predation’s designer, Shanna Germain, also wrote a cool blog post about two of the groups in this setting: SATI and the Butterflies. (That needs to be a band name.) These writeups gave me ideas for more cool prehistoric factions! I’m sure Shanna will love them.

While Space and Time, Interglobal (SATI) is all cozy inside the group’s time-travel bunkers, and the Butterflies are camping out in the trees or mud or whatever, a group called the Sleestaks are living in style in a place they call the Lost City. Hear that hissing sound? That means “Go away or we’ll eat you” in Sleestak. These handsome reptilian fellows don’t go out in the daytime, but at night they’ll be eager to find some unprotected humans they might take back home to sacrifice to their god.

I hope you’re not thinking there’s only room for one batch of humanoid lizards in the prehistoric world, because a species known as the Silurians is also on the scene. Waaaay in the future (1970, man) they’ll cause problems for a time traveler, but in our dino-setting they’re still debating whether it’s time to go into hibernation or not. Considering themselves to be the masters of Earth, the Silurians don’t like the idea of sharing their planet with a group of time-traveling upstarts. With their advanced knowledge of genetic engineering, it’s possible the Silurians will give the humans a taste of their own medicine and perform experiments to see how versatile the human genome can be.

The SATI folks might be pretty proud of their time-travel base and cybernetics and iPods and such, but the true masters of technology in this era are the Flintstones faction. Led by an inscrutable warrior called Fred, the Flintstones have cobbled together an empire featuring engineering feats such as bird-tech audio sampling, massive-scale quarry excavation, and foot-powered cars. The Flintstones are not aggressive, but they can be protective of their scientific advances—and Fred himself has a legendary temper. Members of other factions have learned to approach the Flintstones with caution…and a giant offering of ribs.