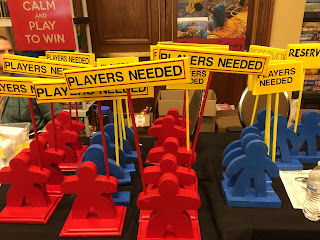 Memphis’s oldest and biggest science fiction & gaming con is MidSouthCon. This year was number 34, and yes of course I went (like I’ve been doing since high school).

Most of my activities were gaming-related, so I’ll focus on those. The con also featured seminars, writing & artist guests, kid-friendly activities, a dealer’s room, an art show, video gaming, a dance, a banquet, and probably other stuff I’m forgetting, so this won’t be comprehensive coverage. Hell, it won’t even be comprehensive coverage of the gaming–just the things I personally played.

Of course I had to get into a Shadow of the Demon Lord session, being run by Gaming Guest of Honor Rob Schwalb, the game’s designer. I’d read the book but hadn’t played the game, and I’m happy to say it’s lots of fun to play. Rob ran “The Apple of Her Eye” by Steve Kenson. He’s an animated GM, and skilled at using voices and evocative description.

I didn’t know until this game session that Rob had added a lot more playable races to the game than the ones featured in the core rules. Just from my choices from his stack of rogues, I could pick between a revenant, a vampire, and a pixie. I chose the latter, and had a blast. Another player made good use of a revenant priest. Our youngest player (who plays Catastrophe in my Numenera game) chose a changeling, which she played to horrific effect. (She took the form of a bartender, then killed him so he wouldn’t jeopardize her disguise.) 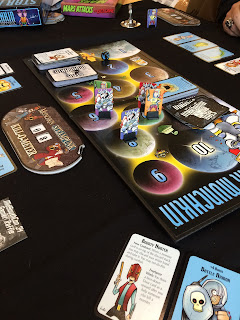 Playing Munchkin is a MidSouthCon tradition for me—at least in the years when my friend Kerry Jordan attends. He brings his huge collection of Munchkin games and runs a few slots to teach people to play it. Indeed, this is how my wife got her introduction to the game—and went on to win it, totally trouncing the young kids we were playing against.

This year we played the Guest Artist edition of Star Munchkin, while another table played the Nightmare Before Christmas version. (Kerry received this edition from a close personal friend who sees him every year at MidSouthCon.) My wife got close to winning this game, too, but another player—who had never played before—kicked our asses. We agreed he deserved the win! 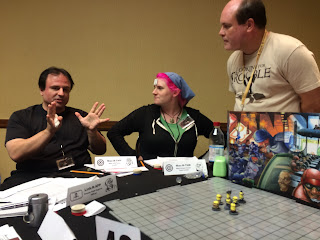 Speaking of Kerry…another of his traditions is running Paranoia. That’s how I first met him! This year he ran “Stealth Train,” a wickedly clever adventure where we had to test an invisible train that wasn’t really there. Kerry is great at running Paranoia, right down to his extensive use of handouts and props. He made a custom notebook for the Loyalty Officer, gave us Bonus Duty lanyards to wear, had name placards on the table to remind us of our character names—all superb details.

The game started out with plenty of the usual shenanigans: sabotaging each other, finger-pointing, tattling on each other to Friend Computer, things like that. One player got a little too hostile, taking things a smidge too seriously, and the rest of us came down on him hard. It was a surprising display of cooperativeness for a Paranoia game. After he lost two clones (and the rest of us hadn’t lost any), this player said he had to go. (#ragequit) For a while, the rest of us continued being cooperative, and actually managed to reach the mission site! Then we remembered what game we were playing, and the backstabbing resumed with a vengeance. One of my favorite moments was when my (former) friend Jerrod used a mutant power to control my hand, making me draw my laser and kill a teammate. Well played, Jerrod. Bastard.

I’d never played Toon before, so jumped on this chance. The GM ran an adventure where we were auditioning for the Muppet Show. We made characters, which went pretty fast. I was proud of my character, a hippo who aspires to lose weight and thus become a unicorn. In the adventure we ended up having to search for Gonzo’s “friend” Camilla. The search led to Colonel Sanders, but we got confused and ended up meeting Bernie Sanders. Then we flew to Kentucky, and someone gave us directions to Norm McDonald’s house. Eventually Camilla made her own way back to Gonzo, but we (of course) took the credit.

I want to play more Toon, so I’m disappointed it’s out of print. Come on, Steve Jackson Games, bring it back!

The Con’s Over. Go Home. 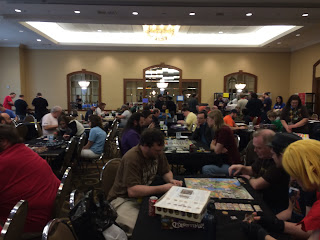 Yep, four games. That’s all. There were others I wanted to play, but they either conflicted with the ones I did play or conflicted with my need for sleep. I saw that people ran Call of Cthulhu, Savage Worlds, 3 editions of D&D, and even playtests of Pugmire and the next edition of Paranoia.

I’m curious about what games people are running at other small cons. If you’ve been to any, please share in the comments!