Skip to content
This is post number 3 in the series “31 Days of Ghostbusters,” a celebration of the franchise’s return to the big screen. 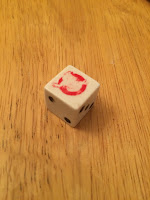 One of the defining features of the Ghostbusters RPG is the Ghost Die. This is a 6-sided die with a ghost symbol taking the place of the 6. Every time a player attempts an action, he includes the Ghost Die as part of his dice pool. Whenever the ghost comes up, something bad happens. (Mwa-ha-ha-ha-haaa!) The GM (Ghostmaster, in Ghostbusters) operates in a similar way, always including a Ghost die for NPC actions, but when a ghostly NPC rolls a ghost, the result is something beneficial to the ghost!

Besides that, though, it’s just plain fun that in about one out of six die rolls at the table, something screwy is going to happen to the Ghostbusters! The game encourages the GM to make these incidents funny (as if we wouldn’t), and when I run Ghostbusters, one of my favorite things to do is figure out the unfortunate, inconvenient, sometimes-painful, and always-funny consequences of rolling a Ghost.

It shouldn’t come as too much of a surprise that after 30 years, the paint that makes up the ghost symbol on a ghost die might be a bit faded. (That’s mine up at the top of the page.) It’s easy enough to use any old die, so long as it looks different than the non-ghost dice, and you remember not to count the 6, instead treating it like a Ghost. Or you can find other dice that have a symbol on the 6 for this purpose, which is just as easy as using an authentic Ghost Die, just 50 to 95 percent less cool. (Also, be warned that some specialty 6-siders have the symbol on the 1 instead of the 6. Bastards.)

I tried making my own Ghost Dice recently using regular dice and printable self-adhesive circle labels, but I wasn’t successful. I’m happy with the dice I picked: Chessex 16mm d6, opaque white with black pips (I bought a block of 12 on Amazon, Chessex part number CHX25601). But in my first attempt I used 0.5” labels, and they were too small (the pips were visible at the edges of the Ghost sticker). I moved up one size to the 0.625” labels, which were a better fit, but I couldn’t get the template to line up correctly—printing in both Word and OpenOffice Writer resulted in the Ghost symbols being out-of-sync with the labels, getting worse toward the right side of the page. (Sweet Gozer, messing with image and table alignments in Microsoft Word is soul-crushing! In case you want to show me you can do better, the labels I tried were OnlineLabels.com, item OL1575WX in standard white matte.)

While writing this post I found a website called Nerdy Show that sells custom-etched Ghost Dice for $1 each. I’ve ordered some, and I’ll update this post when they arrive to give you my impressions.

To my fellow Ghostmasters: How’s your Ghost Die holding up? Have you found a good replacement?