This is post number 6 in the series “31 Days of Ghostbusters,” a celebration of the franchise’s return to the big screen.

Today’s post also appears on Gnome Stew, the best damn gaming website anywhere. I’m posting it here for continuity, but I suggest you read it on Gnome Stew. It’s prettier there.

A Brief Overview of The Ghostbusters RPG 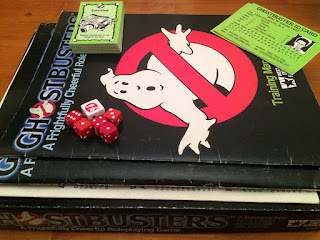 The Ghostbusters RPG was released in 1986,  just about midway between the theatrical releases of the two original movies. The game boasts an amazing pedigree, having been designed by Chaosium (the makers of Call of Cthulhu, first released five years earlier) and developed by West End Games (the creators of Paranoia in 1984). Long-time gamers will probably recognize some of the names involved in the game’s initial launch: Sandy Petersen, Lynn Willis, Greg Stafford, Ken Rolston, Martin Wixted, Paul Murphy, and Greg Costikyan.

Ghostbusters shipped in a box (retro, right?) and contained a Training Manual, Operations Manual, How To Play file, 6 dice, equipment cards, and Ghostbuster ID cards. The 24-page Training Manual served as a player’s guide, presenting character creation, basic rules, and a primer on ghosts. Inside the beefier 64-page Operations Manual you’d find material for the GM (the Ghostmaster, of course), including rules for creating ghosts, conducting scientific research, and establishing a ghost-busting franchise, in addition to GM tips, three adventures, 21 adventure ideas, a random adventure generator, and a bunch of useful non-player characters. The How To Play file provided a quick rules summary, adventure maps, and some fun forms such as a Franchise Contract and a Release From Damages form. 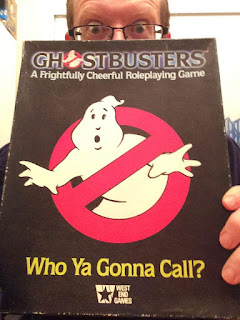 In Ghostbusters, players take the roles of either the cast of the movie (using the provided ID cards) or their own custom paranormal exterminators. The game’s background establishes a narrative framework for the latter in describing a parent company, Ghostbusters International, that sells franchise rights to wanna-be Ghostbusters in different cities. (Peter Venkman even mentioned this possibility in the first movie.)

Besides being a game that lets you become a Ghostbuster, the best thing about Ghostbusters was its elegant simplicity. This game has no speed or movement rates, no ranges, no advantages or disadvantages. Here are the basics of the Ghostbusters rules:

That’s most of what you need to know to play the game! Check out the tiny character sheet! We’ve already covered most of the details on it. The other pertinent bits are Brownie Points and Goal. Brownie Points are the Ghostbusters version of experience points, which you can spend to enhance dice rolls, reduce story penalties, and (more rarely) upgrade Traits. Characters earn Brownie Points from completing adventures and achieving personal Goals. The standard list of Goals includes Sex, Wealth, Fame, Soulless Science, and Serving Humanity. Each player chooses one, or makes up his own.

The rules for ghosts are just as simple as those for players. The Operations Manual provides 12 ghostly powers, things like possess, animate, terrorize, and, of course, slime. A ghost also has ratings for Power (how many dice it rolls to do things), Ectopresence (how many hits it can take), and a Goal. A ghost’s Goal is perhaps even more important than a PC’s, because it can provide another way to get rid of the ghost besides blasting it (which doesn’t work on every ghost anyway). For example, the ghost of a struggling director might stop haunting his former movie studio if the Ghostbusters manage to finish his movie and arrange a screening. 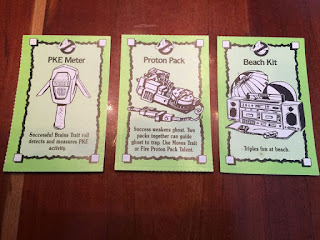 Another important part of the game is the use of equipment cards. If your Ghostbuster has a PKE meter, ecto-visor, and ghost trap, then you’ll have cards in front of you to remind you of that. Some cards also contain rule info, such as the card for alpine gear telling you it adds three dice to your Muscles pool. (You may have guessed that not all the cards are designed to be serious, or actually useful.) The game even has cards for tomes such as Tobin’s Spirit Guide and Spates Catalog of Nameless Horrors. 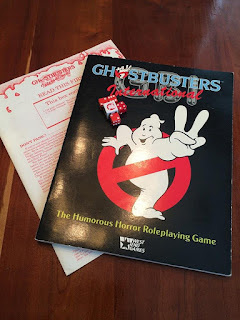 Three years later, in 1989, West End released a second edition of the game: Ghostbusters International, developed by Aaron Allston and Douglas Kaufman. The game’s release coincided with the second Ghostbusters movie, though nothing in this edition’s contents even hints at that fact other than the Ghostbusters 2 logo and a two-sentence mention of the film in the rulebook’s introduction.

Ghostbusters International (GBI) came in a box, like its older brother, and similarly shipped with rulebooks and 6 dice. This time, though, the main rules were put into a single book (plus a booklet of handouts). Another notable change was the absence of equipment cards and Ghostbuster ID cards from this edition. (Boo.)

The basic Ghostbusters system remained the same, though GBI was noticeably more complex. The added complexity wasn’t as great as the change between, say, original Dungeons & Dragons and 3rd Edition; it was more a case of adding auxiliary details, rather than changing the basics of the system. In other words, it still had 4 Traits and 4 Talents, used dice the same way (including the Ghost Die), and had Brownie Points and Goals. But in addition, it now had a full-page character sheet, with lines for physical description details, health status, wound effects, and where on the body each piece of gear is equipped.

Other key changes in this edition were a longer and more detailed equipment list, rules for differentiating physical ghosts from ethereal ones (and intelligent ghosts from mindless ones), encumbrance rules, ghostly weaknesses, greater vs lesser ghost powers, and supernatural abilities for humans. Also, for the first time, we have a full-page ghost character sheet.

I’ve encountered some Ghostbusters players and Ghostmasters who complained about the GBI edition, saying that the added level of detail was not an improvement, that the game should have remained as simple and unadorned as possible. Personally, I like both editions. I sometimes ignore the GBI additions, running my game exactly as it was in its first edition. On other occasions, I add some GBI detail, especially the expanded ghost rules. (Encumbrance rules, however, can go sit in the corner.) 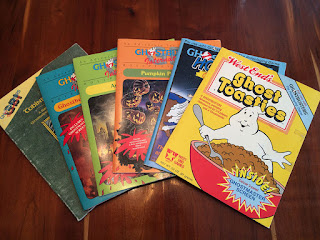 The game was supported by the release of eight supplementary books–three for the first edition and five for Ghostbusters International. The first edition books were all adventures: Ghost Toasties, Hot Rods of the Gods, and Scared Stiffs.

In Ghost Toasties, the players face a supermarket cereal killer, a demon-haunted school, and twisted cartoon cereal mascots living in Candyland. The cover of Ghost Toasties also serves as a handy three-panel Ghostmaster’s screen! Hot Rods of the Gods features juvenile delinquents from outer space, a demolition derby mini-boardgame, men in black, and a re-designed and alien-enhanced Ectomobile.

For Ghostbusters International, West End published four adventures and one sourcebook. The flagship adventure (in name, at least) was Ghostbusters II: The Adventure, which allowed YOUR Ghostbusters to save the world from Vigo the Carpathian while the original Ghostbusters are locked away in a psychiatric ward. (Like Ghost Toasties, this adventure came with a Ghostmaster’s screen, this one updated for GBI).

In ApoKERMIS Now!, the team faces an evil from the “Big Book of Dark Ceremonies and Party Games.” Pumpkin Patch Panic is a Halloween-themed adventure in which the bad guys want to make Halloween last forever. (Doesn’t sound bad to me!) And in Lurid Tales of Doom the PCs must accompany a reporter for a tabloid to look for evidence of the supernatural in the newspaper’s stories.

The only non-adventure sourcebook published for Ghostbusters was Tobin’s Spirit Guide, easily the beefiest of the Ghostbusters supplements (at 76 pages). The Guide is a sampling of ghosts from around the world. Some highlights include Egyptian gods, boggarts, a Gozerian cult, Baba Yaga, the Headless Hunter, voodoo loas, Old Tom the pirate, and the world’s first feminist. An appendix at the back of the book also provides a reference to ghosts featured in previous Ghostbusters adventures.

1990 was the last year of Ghostbusters RPG releases. Even so, you can still find Ghostbusters games being run at conventions today, as I did at Gen Con the last two years. With a little luck, you can find a used copy for sale. (Every time I check eBay I see a few available.) Even out of print, this game lives on.

What’s more important than the game itself, though, is what it inspired. I believe that much of what’s great about gaming today can be traced back to Ghostbusters. It was the first system to use a dice pool, a concept that was the basis for West End’s next game, Star Wars: The Roleplaying Game. It was rules-light, and easy to teach to new players. Even the Ghost Die lived on in later games, appearing as a wild die, a drama die, and in a strange case of becoming your own grandparent, a computer die in the next version of Paranoia (which will also use equipment cards!).

As we noted earlier, Ghostbusters was the creation of both Chaosium (the Call of Cthulhu people) and West End Games (the Paranoia people), and that seems perfectly symbolic. Horror plus twisted humor. Solid rules plus a minimalist level of detail. Supernatural entities plus a quirky way to bounce dice. Other games inherited this thematic influence, too, and we’ll cover some of them in a future article.

Have you ever played the Ghostbusters RPG, or any other spook-hunting game? I’d love to hear your stories, memories, or possessed ramblings in the comments.