This is post number 7 in the series “31 Days of Ghostbusters,” a celebration of the franchise’s return to the big screen.

If you use the Ghostbusters RPG to run a game set when the movie came out—the mid 1980s—then you’re all set. The game world and equipment list reflect that reality, from the standard Ghostbusters walkie talkies to the new, cutting edge “cellular phone” the team could carry in the car. The last time I started a Ghostbusters campaign, a few years ago, I was tempted to go with such a retro setup. The Ghostbusters would receive missions by phone, or from people walking in off the street, or by a letter from Ghostbusters Inc., and the clothing, music, and guest star NPCs would all be artifacts of the 80s.

If, on the other hand, you want to run a game set in the modern day, you’ll need to do some modernizing. I had some ideas about this for my campaign, which I’ve broken up into three categories: equipment, societal changes, and social media. 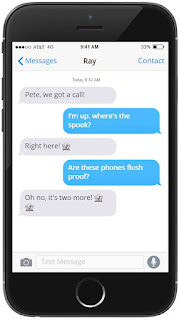 First, the Ghostbusters will probably ditch walkie-talkies and switch to smartphones. In addition to enabling the team to talk and text on the go, smartphones will let them:

The main tools of the ghostbusting trade—proton packs, ghost traps, and the containment grid—still seem pretty futuristic today. But don’t let that stop your efforts to update them! Maybe Ghostbusters R&D has developed a miniaturized containment grid, perhaps even a portable one, say the size of a shoebox. Or maybe proton packs have built-in stream-crossing failsafes, or we have ghost traps that hover and chase a target. And one thing all ghostbusting equipment could use is a reduced environmental footprint. (Just ask the EPA.)

No changes are needed for the beach kit. It remains as relevant as ever. 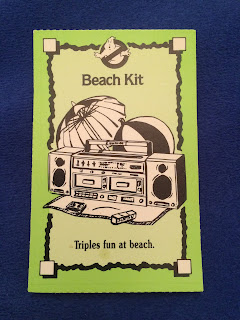 If your Ghostbusters modernization assumes that the movie events took place in the 80s and that the modern player characters are the inheritors of that legacy (as I did in my recent campaign), then you might also want to consider the changes in society that would likely result from these two facts: (1) ghosts exist, and (2) Ghostbusters exist.

From these facts, we might expect to see an increase in popularity of parapsychology as a college major. A concrete example of this would be to have an NPC working for the team who is an intern from a local university.

Proof in the paranormal would also likely have an effect on the TV shows that center on ghostly phenomena, like the ones airing in the real world on the increasingly-poorly-named History Channel. These shows might have higher budgets, more prestigious guest stars (“Mr. Cruise, tell us more about the ghost that’s stalking you,”) and even content the team could use for research purposes. “There’s a ghost stealing socks from the dryer in the White House? I think I saw a show about sock-stealing ghosts the other day on SpookTV!” You could even have a camera crew following the PCs around during an adventure to document a day in the life of the Ghostbusters.

Political issues could be a concern for your team, too. Maybe some people think it’s immoral to trap a ghost, and try to get Ghostbusting outlawed. The team might also find themselves in legal trouble for all the property damage they cause. (Be wary of overdoing this angle, though, because trashing buildings and the like seems integral in recreating the feel of the movies.) Also, busting ghosts can be a hazardous job—does your franchise offer a sufficient healthcare plan?

Like any other modern business, the Ghostbusters will need a strong presence in social media.  For starters, your players’ franchise absolutely needs its own Facebook page. How else will their fans give them research tips, request missions at any hour of the day, and post “friendly” messages telling just what they think about the local Ghostbusters and where they can put their Ectomobile? This might open up a new Goal: Friends (strive to have an ever-increasing number of friends, online and off). But most importantly, we can finally learn which Disney character each team member would be.

“Who Ya Gonna Call”™ is so last century. Today it’s #WhoYaGonnaTweet? Like Facebook, Twitter could be a valuable source of customers and complaints, with the dubious addition of being able to connect the team with celebrities around the world. Want to know what @WilliamShatner thinks about the outcome of the latest Ghostbusters mission? Too bad, you will. PCs with the Goal of Fame will certainly get a lot of use out of Twitter, as will the newest generation of up-and-coming millenial Ghostbusters who like phone calls about as much as Slimer likes proton streams. #PoorSlimer 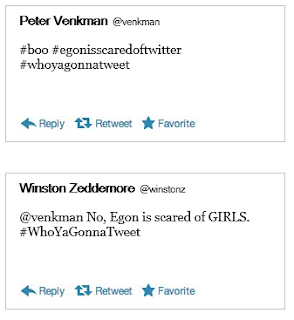 Photo and video sharing could be big for the franchise, too, adding Instagram and YouTube to the Ghostbusters’ social media empire. How many likes will the capture of a free repeater earn? Or a shot of a figure from history scaring the crowd at a Starbucks? Or one Ghostbuster accidentally blasting another? (Answer: not as many as a spectral wardrobe malfunction.)

The new Ghostbusters movie will likely have more ideas about Ghostbusting in the 21st Century, so I’ll address this topic again later. Until then, what are your ideas?