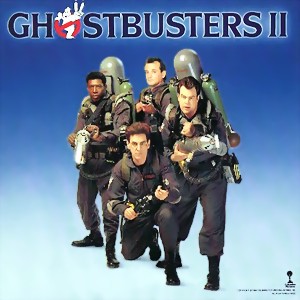 This is post number 11 in the series “31 Days of Ghostbusters,” a celebration of the franchise’s return to the big screen.

I feel like I’m not being completely fair in rating both this album and the original Ghostbusters soundtrack, because while I’ve listened to the original movie’s music lots and lots of times since I was a teenager, I only got around to trying out Ghostbusters II a few years ago. Some of the tracks from Ghostbusters get a pass from me for the sole reason that I’ve been listening to them since childhood. That won’t be true of any tracks below.

The Ghostbusters II soundtrack was released in 1989. Where the Ghostbusters soundtrack at least had two tracks pulled from the film score, this one did not; it contained only pop and rap songs, most (but not all) of which were used in the movie. The album tracks are: