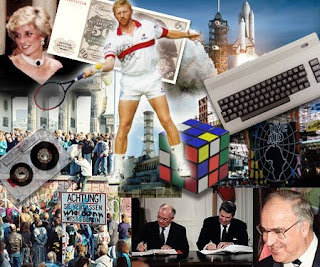 This is post number 12 in the series “31 Days of Ghostbusters,” a celebration of the franchise’s return to the big screen.

The (natural) assumption in the Ghostbusters RPG is that your Ghostbusters will be running around modern-day (or close enough) Earth zapping ghosts for money. But that’s not all you can do with Ghostbusters! Join me in my time-and-space-machine and we’ll take a look at a few alternate options to use when building a new Ghostbusters campaign.

Many other games assume that the action will be set in the modern day, and that’s not a bad way to run Ghostbusters. This is arguably the way that the Ghostbusters RPG is intended to be used—at the time it was written, everything in the game was either modern or even a little bit futuristic. That’s great and all, but let’s see what kind of fun we can have busting spooks in other times!

The Ghostbusters films were made in the 80s, and both editions of the game were made in the 80s, so it’s not a stretch to figure someone is going to want to have their game set in the same decade. You get to describe the fashions! Play the background music! Act out the celebrity guest stars! And you don’t have to worry about ubiquitous technological nuisances like smartphones and email short-circuiting your ghost story.

One way to set a game in the past—before the founding of the Ghostbusters in the 1980s, I mean—is to start the team in the present and then strand the in the past after some kind of temporal accident. Another way would be to have your players take on the roles of a team of Ghostbusters that history forgot—pioneers who were busting ghosts using charmingly low-tech solutions, such as steam-powered proton packs or tesla coil ghost traps. Either route could give your Ghostbusters the opportunity to bust ghosts in the Wild West, ancient Rome, or the caveman era. (Probably best not to stay too long in that last one, since there will probably only be a handful of ghosts!) Note that setting a game in the 1920s will let you use your Call of Cthulhu background material (and maybe throw some Lovecraftian horrors at the team).

Getting your Ghostbusters into the future can happen the same as it would for the past: send them there, or start them there. (It looks like the upcoming animated series Ghostbusters: Ecto Force will do the latter.) What differs is the flavor of their adventures as they operate in a world of cold fusion power, flying cars, and cyberspace. What is it like to be a Ghostbuster in an age when the line between a ghost and a human intelligence stored in the cloud becomes blurred. Something else to consider about busting ghosts in the future is that the spooks the players encounter could be people who are still alive today!

Who says Ghostbusters have to be humans…or mortals? You might base a campaign on the premise that one or more of the player characters are non-human entities. Maybe psychics turn out to be excellent Ghostbusters. Or maybe Ghostbusters, Inc. rolls out a work release program with the goal of transitioning some of the more well-behaved spectres into productive afterlives by employing them as probationary Ghostbusters. In a campaign set in the future, players might be alien Ghostbusters, or robotic ones. (InSpectres, an excellent spiritual successor to Ghostbusters, contains a whole chapter on this topic. More about InSpectres is coming soon.)

Not only can we leave New York City for our ghost-busting adventures, we can leave the United States entirely. The Ghostbusters are fully capable of causing property damage on a global scale—and beyond!

If the Ghostmaster in question already lives somewhere other than the U.S., then this option is a no-brainer, and will be “domestic” rather than “exotic.” But either way, setting a Ghostbusters game in another country can bring new, unique elements into play. Irish Ghostbusters will probably get sick of dealing with banshees, while Middle Eastern Ghostbusters battle genies. All while dealing with their country’s internal politics, of course.

Probably best tied with a far-future setting, basing the Ghostbusters on another planet would provide numerous ways to change up a game. If it’s an alien planet, consider whether the ghosts of these aliens even behave remotely similar to human ghosts—they may not even behave similar to the aliens that are still alive. What happens when an alien ghost possesses a human? Can ghosts travel between planets? Do aliens make good Ghostbusters? Is there a star empire made up entirely of alien spirits?

If you want to be REALLY far out, establish a franchise in another dimension, such as an alternate Earth. Perhaps on this Earth, the Ghostbusters are all superheroes and don’t need special equipment to fight ghosts. Or ghosts and mortals live side by side and the job of the Ghostbusters (or “Ghost Department”) is to act as police officers and keep the peace. Or everything is the same as on our Earth except that the PCs have goatees. (Yep, even the women.)

Got a campaign idea to share with me? On at least one Earth, I’m all ears!