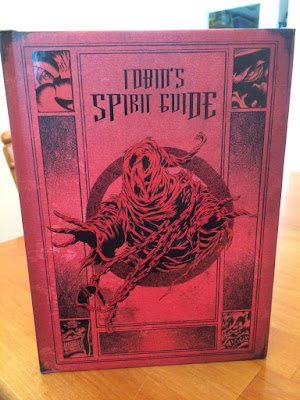 This is post number 26 in the series “31 Days of Ghostbusters,” a celebration of the franchise’s return to the big screen.

A game of Ghostbusters is very different from a game of Call of Cthulhu. In one, the heroes dress as flappers, and in the other, sanitation workers. One is a game of horror comedy, where the other is horror that turns to comedy when a character bombs a sanity roll, grabs an axe, and chases his allies up a tree. But they do have two things in common: entities beyond the ken of mortals, and performing research to learn about such entities.

The following is a collection of paranormal reference books useful to Ghostbusters. Most were mentioned in the original film, one was introduced in the Real Ghostbusters animated series, at least one was added in the RPG, and the last two are from the 2016 film.

In-game, a Ghostbuster would read (or more likely reference) one of these books when searching for clues about a particular paranormal problem. Each entry lists the general area of knowledge a reader might learn about in that book. Sometimes the Ghostmaster will provide the clues automatically to a player who thinks to read the appropriate book; in other instances the book might provide bonus dice to a task involving that domain. (For example, reading up on gremlin worshippers in the Roylance Guide could impart +2 dice to characters attempting to impersonate these cultists and gain access to their next meeting.)

This is the first stop for most Ghostbusters who want to learn more about a specific ghost or type of ghost. Did a tupperware container just spit out a customer’s soup and scream, “Your offering displeases Joffo! Joffo is not to be trifled with!” Then you might want to look up “Joffo” in Tobin’s Spirit Guide. Performing research using the Guide can impart clues about a specific ghost, or help a Ghostbuster identify such.

(Note: At least two published versions of Tobin’s Spirit Guide exist in the real world. One is a supplement for the Ghostbusters International RPG, published in 1989 by West End Games and containing information and game stats for ghosts from around the world. The other is a beautiful hardcover by Erik Burnham that came out this year, giving details and creepy illustrations of ghosts from the original movies plus some original creations.)

Are you being bugged by weird robed men and women worshipping your car? Do you frequently catch strangers following you, but trying not to look like they’re following you, and you sometimes overhear them whispering that you’re the “chosen one?” Tired of having goat’s blood thrown on you by cultists? Then turn to the Roylance Guide and figure out who these freaks are and what they want. (Then make sure they never, never, EVER get their wish. If you like living on a planet that’s undevoured.) Read the Roylance Guide for information about (you guessed it) secret societies and sects.

Don’t make the rookie occultist’s mistake of thinking this book is useful for finding entities that you haven’t found a name for. That just means you haven’t done enough research in the OTHER books. No, Spate’s Catalog is where you turn when you’re investigating a Great Old One, or an Elder God, or some other Really Nasty Bad Guy. Will the book tell you the monster’s weak point, its Achilles’ Heel, its Death Star Exhaust Port? If you’re lucky. But even if you’re not, you’ll be able to learn more details about exactly HOW you and the rest of the world are going to die. Studying Spate’s Catalog can give clues about Class VII metaspectres and other such high-powered entities.

The Big Book of Occult Lore by Fredde

Fredde’s massive compilation of paranormal knowledge gather from around the world is invaluable for those cases when you don’t know who or what is responsible for the problem at hand. Did a word just appear on a kindergarten class wall written in ectoplasm? This is the book you’ll use to look it up. Referencing this encyclopedic work will reveal clues about general paranormal phenomena, such as UFOs, astral projections, mental telepathy, ESP, clairvoyance, spirit photography, telekinetic movement, full trance mediums, the Loch Ness monster and the theory of Atlantis.

The Ghostbusters Handbook by Stafford, Petersen, and Willis

Where Tobin’s Spirit Guide provides details on known ghosts, the Ghostbusters Handbook published by Ghostbusters, Inc. serves as a more basic primer on ghostly classifications (including the ghostly classes (I through VII) and all known paranormal properties (from anchored to vaporous). Just as important, according to Ghostbusters, Inc., are the chapters on safety methods, benefits, and HR policies. Reading the Handbook can provide clues about basic ghost types and their abilities.

“MMM” is the book to grab when you need to learn more about an individual human threat. You won’t find stage magicians in here—unless they’re also true mages—but you will find wizards, mediums, cult leaders, mad scientists, sorcerers, prophets, and other powerful individuals of varying sanity levels. Flip through this book when you need a clue about such a weirdo.

This feared and despised book is often sought out by insane cultists or those who want to stop them (such as Ghostbusters). A character might be able to reference the copy at Miskatonic University in Arkham, Massachusetts, though the book has a storied history of going missing. Even if a Ghostbuster does get his hands on the book, reading or even possessing the book can come with its own set of problems, including but not limited to increased regional ectoplasmic energy, temporary possession, memory loss, memory gain, power outages, and mysterious illnesses. Reading the book can provide clues on nearly any occult research topic.

Ghosts From Our Past: Both Literally and Figuratively: The Study of the Paranormal

(Note: I’ve repeated this entry from the post on Ghostbusters 2016 Equipment. Please forgive me. I believe it belongs in both places. Also, I’ve taken the liberty of adding a few words.)

This seminal work by Ghostbusters founders Erin Gilbert and Abby L. Yates contains the authors’ early theories on the paranormal—theories which they proved true in the field. The book is available in hardcover, on Kindle, and as an audiobook. Ghostbusters could reference Ghosts From Our Past for clues relating to topics such as basic ghostology, the history of ghost-hunting, ghostbusting equipment (that was still theoretical at the time of the book’s writing), and how to conduct a metaphysical examination.

A Glimpse Into the Unknown: A Journey Into a Portal: Catching Sight of the Other Dimension: Discovering the Undiscoverable: A Curiosity Piqued and Peaked

(Note: I’ve repeated this entry from the post on Ghostbusters 2016 Equipment. I beg for your mercy for such a transgression. I believe it, too, belongs in both places.)

The follow-up book by Gilbert and Yates covers what they experienced and learned during the formation of the Ghostbusters. Up-and-coming Ghostbusters might reference this book for information about the ghosts of New York, Rowan the Destroyer, and running a Ghostbusers franchise. The audiobook version read by Kevin Beckman is NOT recommended.