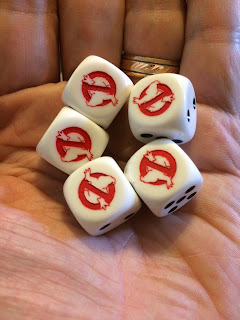 This is post number 27 in the series “31 Days of Ghostbusters,” a celebration of the franchise’s return to the big screen.

This month I’ve come across a lot of good material on the Internet about Ghostbusters in general and the RPG in particular. Now it’s time to share!

This is not a comprehensive list of online Ghostbusters resources; these are just the ones that jumped out at me or that came to my attention during this 31 Days of Ghostbusters.

Having said that, if I’ve left off a resource you’d like to recommend, please give me the details in the comments.

Nerdy Show Network
In addition to the other general nerdy podcasts, news, and merchandise available at the Nerdy Show Network, they feature some specific Ghostbusters love. They have a podcast, Ghostbusters Resurrection, which I’ll describe down in the Podcasts section. In addition to selling Ghost Dice (discussed in the next section), the Nerdy Show store also sells their own custom equipment and character ID cards—or you can download a print & play version.

“When There’s Something Strange“ by Ryan Chaddock
Prolific third-party Cypher System publisher Ryan Chaddock recently posted his take on using the Cypher System for a Ghostbusters game. Because I’m writing up something similar for a post later this week, I haven’t read his yet–I want our efforts to be as unique as possible! But I’m really looking forward to seeing how he handled it.

Nerdy Show Ghost Dice
I mentioned the laser-etched Ghost Die from Nerdy Show previously (in my Ghost Die post), and now mine have arrived. I love them, and highly recommend them.

3D Printed Ghost Dice
My friend (D&D adventure writer Kerry Jordan) pointed me to another source for Ghost Dice, this one by runcibleshaw on Shapeways. Two varieties are available, one that looks hollow and the other solid. (It’s hard to make out the details for certain.) Kerry and I haven’t tried these dice, so don’t know whether to recommend them. If you try them out, please let me know!

These sites offer material about the fictional elements of the movies and shows—info about the characters, technology, ghosts, locations, etc.

Ectozone
This site holds a virtual encyclopedia of details about the Ghostbusters, their history, their equipment, and more. It also includes a timeline of the movies and both animated series. In addition to the resource section, Ectozone has news, fan fiction, and artwork.

Ghostbusters International
In addition to featuring a good news page, Ghostbusters International presents a lot of material from an in-universe perspective, as if you were looking at the actual website of a paranormal elimination company. They’ve got info on equipment, publications, and franchising. My favorite feature is their collection of links to other, regional fan sites, such as Ghostbusters London. Also, on this site you can get some info on the out-of-print Ghostbusters RPG.

Ghostbusters Wiki
I’ve referenced this one a lot this month! It’s the Wikia site for Ghostbusters info, accurately billed as  “The Compendium of Ghostbusting.” Need to know all the appearances of the Necronomicon in Ghostbusters episodes or games? It’s here.

Paranormal Studies Lab
This site, apparently hosted by Columbia Pictures, has cool images and schematics of the new Ghostbusters equipment.

These sites are more non-fiction, including news about the movies and shows, product reviews, fan forums, things like that.

Ghostbusters Fans
A comprehensive site for info and discussion about the films and TV series plus their related publications, toys, and more. Ghostbusters Fans has a useful news page, plus a forum, fan art, and even a store with merchandise and costume parts.

Ghostbusters HQ
This site focuses more on news and reviews, and does a good job of it. It’s also the home of the Ghostbusters Interdimensional Crossrip Podcast, detailed below.

Ghostbusters News
As the title might have made you guess, this is another site with an emphasis on news, broken down by category (including “games” and “toys”). It’s also got a sweet t-shirt store.

Proton Charging
This is a long-running Ghostbusters news site that seems to have migrated to Facebook.

Spook Central
This comprehensive site features tons of detailed information about the original films and animated series, right down to episode guides, details about the soundtracks, and merchandise info.

Ghostbusters Resurrection
This production from the Nerdy Show consists of two seasons of actual-play RPG sessions, enhanced by music and sound effects from the movies.

I haven’t listened to these, so I’m including their iTunes descriptions to summarize them.

Cross the Streams
“This program is hosted by three of the most outrageous and obsessed Ghostbuster fans which are referred to as Ghostheads. Each episode contains interviews with those who have worked within the Ghostbusters franchise in some way, shape or form. We at times branch out and talk 80’s pop culture and our own personal lives.”

The Ghostbusters Interdimensional Crossrip Podcast
“A podcast on everything Ghostbusters by two long-time fansite webmasters Troy Benjamin (of Ghostbusters HQ) and Chris Stewart (of Proton Charging). Join us for in-depth analysis of the latest news, commentary on goings on, and interviews with some familiar faces.”

This Week in Ghostbusters
“Two guys (Don Dudding and Ryan Hill) apparently have nothing else to do but speculate over the possibilities of a new Ghostbusters movie while waxing nostalgically over the original two films (and their stars, their various cartoon versions, and anything else related to Ghostbusters). Funny and awkward in all the right ways. Leave a comment, and they’ll probably talk about it on the show.”