I found out what it takes to make my teenager proud of me: getting my face up on a movie screen!

Let me back up a bit. My wife and son and I are big fans of RiffTrax, the former Mystery Science 3000 guys who now produce downloadable movie commentary tracks (the “riff tracks”). Better still, the RiffTrax crew also do live in-theater movie riffs a few times a year.

When the latest riff—Time Chasers–came to a theater within driving range, I had to go see it in person. (They record the riffing at one theater and broadcast it to a few hundred others.) I wanted to take my son, but it was a school night (a Thursday, even). He was staying with his mom that week, so she and I agreed it would be best not to mention the show to him. Didn’t want the boy to be upset that he couldn’t go. 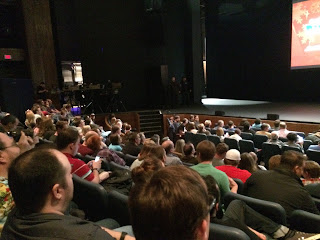 So, it was just my wife and me at the Nashville show. We loved it! Before the show, some camera operators rounded up a bunch of fans wearing MST-related shirts and had us cheer for the camera. They like to splice in shots from the live showing for rebroadcast to the other theaters, and for the eventual DVD release. As you might imagine, I was dressed appropriately, so they put me in this group too. Indeed, I was the only one wearing an actual RiffTrax shirt, so they even pulled me aside after this shot to get a bit of me by myself, cheering like an idiot. (This was only halfway difficult for me. I don’t like being singled out, but I do like getting attention for my carefully selected nerdrobe. You know, nerd-wardrobe? I just coined that. You can use it.) 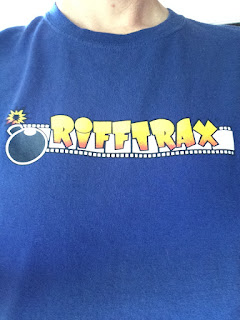 OK, cut to two weeks later. As they always do, the theaters ran an encore showing of the recorded RiffTrax event, and this time I was able to take the boy. I knew there was a chance he would see me in the post-movie-rabid-fan-footage, so I braced myself to tell him the above story. (You didn’t think I wrote all that for YOU, did you?) And to tell him how sorry I was that he couldn’t go with us in person two weeks ago. 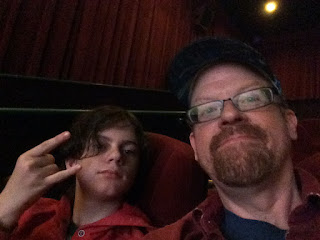 When he saw my mug on screen, the boy went nuts! But in a good way! He said “Oh my god! That’s you!” His mouth was hanging open, I mean literally. They showed me again. “That’s awesome!” He kept saying that over and over again. On the way out of the theater, he told me that seeing me on the movie screen made his day.

My boy is only 13, but in attitude he is already a capital-T Teenager. He doesn’t want take part in a lot of the activities we used to share, or shows we used to watch, and spends a lot of his time practicing his eye-roll and his unimpressed-glare. So it’s great to learn that I can still impress him. All I have to do is…get my mug up on a movie screen.

But what am I gonna do when he’s FOURteen?