While running Edge of the Empire last night, I wished I had some tables like the ones that come with Savage Rifts—the ones that let you generate an adventure on the fly. Specifically, what I wanted in our session was a list of commonly smuggled items, because the players wanted to pick up a quick job.

(I borrowed “counterfeit foodstuffs” from Lords of Nal Hutta, because I found the term entertaining and wanted to see how my players interpreted it. Collectively, we decided that the cargo would be wax fruit, on its way to be sold for school lunches.)

Here’s a table I put together to use next time. I didn’t see anything that exactly suited my needs online, though the community support for this game is outstanding and it wouldn’t surprise me if someone has done this already. Also, I don’t own the smuggler book yet, so something useful might be in there. (If so, let me know!)

If you have anything you’d like to add to this table, let me know in the comments! 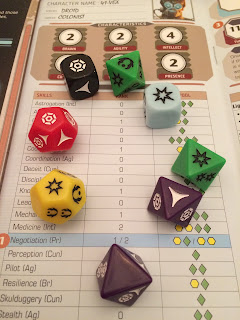 I’ve heard Edge of the Empire players say that the game’s narrative dice system helps recreate the action-packed feeling of the Star Wars movies. With that in mind, I thought I’d imagine how the die results line up with example scenes from the movies. Feel free to share your own ideas in the comments!

No Successes, No Advantage or Despair

No Successes But Some Advantage

No Successes But Some Threat

No Successes But Despair

No Successes But Triumph

Success, No Advantage or Despair

Lots of Successes (or Success + Triumph)

When she was picking out a D&D character to play from the excellent pregenerated PCs on the D&D website, my favorite player (and wife) found the character quotes to be extra helpful in getting a feel for each character. A few days later, when I mentioned wanting to start an Edge of the Empire campaign, she said she’d like to find something similar for characters in that game. We looked around and didn’t find anything like that, so I wrote the ones below, one for each profession. If you find them helpful, or you think of fun quotes of your own, let me know in the comments!

Bounty Hunter: Assassin
“Oh, you want to surrender? That’s a good one.”

Bounty Hunter: Gadgeteer
“I’m sure I can squeeze a little more power out of this thing.”

Colonist: Doctor
“It was close, but I managed to managed to patch you up. Now, let’s talk about what you owe me.”

Colonist: Politico
“Put away your blasters. I’m sure we can work this out.”

Colonist: Scholar
“Don’t trust these guys. I’ve seen those forehead markings before. These are cannibals from the Unknown Regions.”

Explorer: Fringer
“If we can make it to One-Eyed Lev’s cantina, we’ll be safe. Well, safe-ish.”

Explorer: Trader
“I KNOW what you sell the REGULAR customers. I want to see the special stock.”

Hired Gun: Bodyguard
“Trouble. Get behind me. All of you.”

Hired Gun: Marauder
“Nah, keep your blaster. It would only slow me down.”

Smuggler: Pilot
“Hang on…things are about to get bumpy.”

Smuggler: Scoundrel
“Why are you people so jumpy? Don’t you trust me?”

Smuggler: Thief
“Hey, if they didn’t want me to have it, they should have protected it with something better than a G3-series Shock-Lock.”

Technician: Mechanic
“I KNOW the hyperdrive is smoking. Just give me one more minute with it.”

Technician: Slicer
“I can get us past their security if you can keep those guards distracted.”