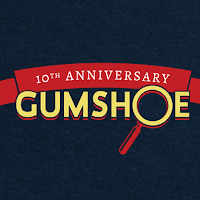 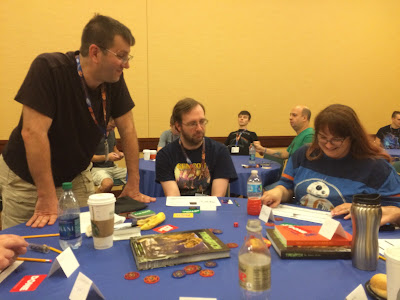 This year I only played in one game at Gen Con. Wait, before you repossess my dice, hear me out.

This was the first year I dragged my wife and son along, so I didn’t want to overload them. Also, as a developing RPG writer, I had a lot of seminars to attend and schmoozing to do, so that took a lot of time. (I had a second game scheduled before we arrived at the con, and ended up canceling it to squeeze in one more seminar.) Finally, I’ve learned to prioritize exhibit hall time over gaming time, because the former is in shorter supply.

Anyway, the game I DID get into was fun enough to justify the whole trip! 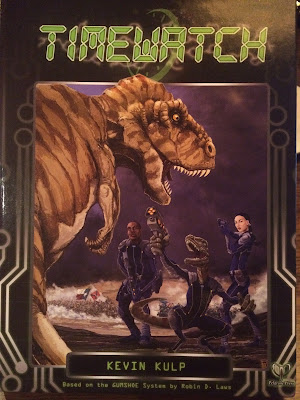 I’m realizing a time theme in my Gen Con games…I’ve attended for the last 3 years in a row, and every year I’ve been in a time travel game. This year’s was TimeWatch.

I had just bought the game the day before, and got to meet its designer, Kevin Kulp. TimeWatch is a gonzo time-travel game that uses the Gumshoe system. I missed the game’s Kickstarter (and cursed myself for bad timing), so I was happy to see it on sale at Pelgrane Press’s booth. (Their buy-3-get-one-free sale worked out great for me, too.)

Jumping forward in time approximately a day from my purchase…guess who turned out to be the GM for our session! Yep, Kevin. Kevin ran the adventure “The Gadget,” which I later learned is in the adventure book “Behind Enemy Times.”

“An obsessive 24th-century collector (and disembodied brain) tries to steal the first working atomic bomb for his own personal museum. As Agents work to stop him, ezeru slip in to steal his collection of nuclear warheads.”

I liked the adventure, and I’m happy to report that Kevin runs a good game. He’s good about letting everyone have their time in the spotlight, including letting each of us define something about the setting (such as the color of time travel, which–in our game–is blue). I also liked his suggestion that we not focus on what was on our character sheets, telling us instead to just think of what cool stuff we wanted to do and go from there.

I played as a British big game hunter from the 19th Century with an impressive elephant gun and an even more impressive mustache. My wife was a sexy liquid-metal-cyborg from India in the future. My son took the part of a caveman with a 12-word vocabulary. (This was a perfect choice for a shy kid who doesn’t want to talk much in front of strangers anyway.)

The other pregenerated characters were all cool too. We had an African pilot from the future, an intelligent velociraptor from an alternate timeline, Genghis Khan’s daughter, and an arrogant scientist who claimed to have invented time travel. These are signature characters in TimeWatch book, referenced in examples throughout the book. 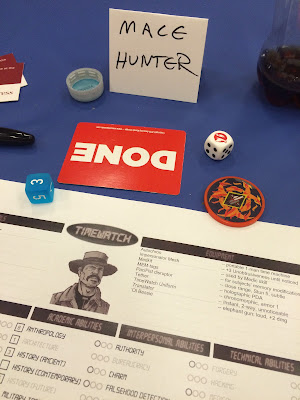 In the adventure, we got to visit several different time periods, gather clues, infiltrate our enemy, and fight a woolly mammoth and a brain-in-a-jar. We were, of course, successful in saving all of time and space. I don’t want to give away too many details about the adventure, in case you have a chance to play it yourself. In fact, if you’re in Memphis, I’ll run it for you!

In general, though, my favorite thing about TimeWatch is that time travel is its core activity. It’s not just a way to get you to the site of an adventure, it’s a tool you’ll use frequently, both in and out of combat. You can have your future self leave an item for you in the present (Bill-and-Ted style). You can jump ahead in time to see the effects of recent events on the timeline. Each character has her own time travel device, so you don’t even have to go as a group.

Oh, another thing I liked about this session was Kevin’s use of “Turn Tracker Cards.” They were awesome for keeping track of whose turn is next and who has already gone–including adversaries, divided up into Minions, Flunkies, etc., all the way up to the Big Bad. (As soon as I got home I ordered my own deck. You can too!)

If this were a review (it’s not), I’d say this: if you like time travel, buy TimeWatch. It’s incredibly fun. As I continue to not review it, I must also say I was surprised how thick the book was. The Gumshoe system seems pretty simple, so I didn’t think this game would require a lot of info. The thing is, I was kinda right! I believe you can run this game after reading just a few of the chapters. A lot of the book is dedicated to alternate campaign settings (every one of which looks compelling), adversaries, adventure seeds, and full adventures. This, for me, is how to present a game: not a lot of it is mandatory for running the game, but they’ve given us a large amount of useful material. 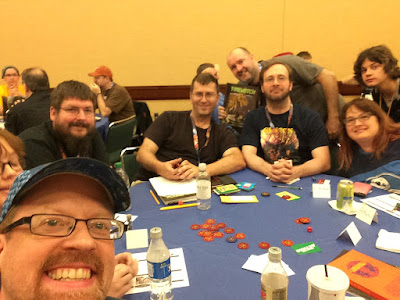