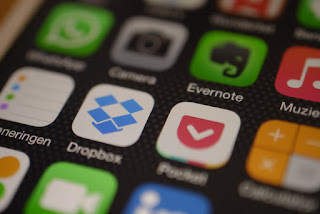 This is post number 8 in the series “31 Days of Ghostbusters,” a celebration of the franchise’s return to the big screen.

As we covered in the post about modernizing the Ghostbusters RPG, smartphones alone open up a new world for our heroes. A big reason for that is the availability of apps that can help them hunt down paranormal critters. Apps such as…

In addition to being bulky, heavy, and hard to reference while holding a PKE meter in one hand, copies of Tobin’s Spirit Guide are also so old and emotionally charged that they’re sometimes haunted themselves! Enter the modern replacement: Tobin’s Spirit App. The 21st Century Ghostbuster uses this app to look up information about a nearly endless collection of spooks, spectres, and spirits. Who has time to flip through crumbling pages to find out how to deal with the mythical two-eyed cyclops while it’s trying to eat the rest of your team? Using the app, you’re just a few taps away from learning that all you have to do is knock off the brute’s monocle and he’ll be defenseless!

Once you equip your phone with a small psychokinetic energy sensor developed by Ghostbusters R&D (sold separately, available in bluetooth), you can access almost all the functionality of the PKE meter in a smaller, sleeker, handier, smartphonier package. This app is especially handy for the occasional job when you want to keep your equipment hidden (or the more frequent job when you just forgot to pack the PKE meter). In practice, most Ghostbusters still use the standard meter when given the choice, until R&D works out that bug where an incoming call causes a feedback pulse that attracts all the ghosts in the area.

Using a combination of GPS satellite data and an array of industrial PKE meters mounted throughout the city, the Spectral Activity Mapper app can help the ghostbusters narrow down a search for a ghost to within a few blocks. The SAM app is especially useful for following a ghost the team already knows about. In theory, it could be used to find unreported ghosts to track, but unless a paying customer is attached, such uses of the app are considered by Ghostbusters Inc. to be “outside recommended parameters.”

Remember the bad old days when researching the spook inhabiting a disused wine cellar required a visit to the library, along with the associated problems with crabby librarians, photocopy fees, and paper cuts? You and me both, ‘buster! Luckily, the modern Ghostbuster has the power of the internet at her fingertips, including apps that cross-reference historical data with interactive maps to let you easily reference the psychic history of whatever area you’re in. Note that Ghostbusters R&D hasn’t created any apps of this type because so many have already been developed by third parties, including ghost-hunting clubs, universities, and random kooks. In other words, the quality varies.

Ghostbusters use a lot of tech. Dangerous tech. Fortunately, a new suite of apps lets the team keep an eye on containment capacity, trap charges, nuclear decay rates, and more, directly from their smartphones. Set an alert for when the grid is nearly full! Automatically order a new shipment of traps from HQ when stock is low! Notify emergency responders when a positron leak occurs!

What app would YOU want to use if you were a Ghostbuster?