Star Trek is 50! Can you believe it? September 8 was the 50th anniversary of Star Trek’s television debut. I was still -3 years old at the time, so I didn’t catch the premiere, but as soon as I was able to start watching the reruns, I did. I really got into the show in junior high, when I had a crush on a girl who—amazingly—knew all the episode titles. (I duplicated this skill over the next year by mentally repeating each title as I read the James Blish episode novelizations; this was in an era before we could watch anything we wanted on demand!)

There’s another Star Trek anniversary this year–at least, for me there is. Thirty years ago, in 1986, Star Trek became the foundation of my first roleplaying experience, when I found FASA’s Star Trek: The Role Playing Game in my local Toys By Roy. I had heard of Dungeons and Dragons before this, but since I wasn’t a fan of fantasy at the time, I was immune to its charms. Star Trek, though, that was a different story! 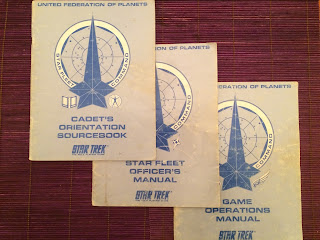 I played this game SO much—probably more than any other game. It came in a box (like many games back then did), which held three thin rulebooks and one of those old 20-sided dice numbered 0 to 9, the kind of die that predated the d10. And the kind you had to fill in the grooves yourself with crayon or marker, if you wanted it to be readable.
The game used a percentile system for both attributes and skills, and boy were there a lot of skills. (Now that I think about it, these two elements probably primed me to fall in love with Call of Cthulhu when I encountered it a year or two later.) Although the first two Star Trek movies had already been released, the boxed set focused on the original series and the animated series. It covered Star Trek pretty well, I thought, with pretty good info on technology and species, and fun systems for creating planets, creatures, and civilizations. Star Trek: The Role Playing Game was also well-supported with a line of adventures, movie sourcebooks, a tactical combat game, and alternate campaign settings like the Klingon, Romulan, and Orion sourcebooks.

Other Star Trek RPGs have come and gone since Star Trek: The Role Playing Game (one of which I also loved), but this one will always be special to me.