This is post number 11 in the series “30 Days of Tales from the Loop,” a celebration of the game set in an 80s that never was.

On Saturday I ran Tales from the Loop for the first time. You may think it’s odd that I hadn’t run it before now, considering I’ve devoted an entire month to writing about it here. But my friend Jenny and I both fell for the game at the same time, and she made me promise not to run it before she could play. (And, being a relatively new mom, her gaming time is limited!)

We went all out for this game, decorating the house with 80s signage and an assortment of Iconic Items. Several of us wore 80s garb. And some of the players (and I) live-tweeted the game on Twitter. (I will talk more about decorating for a Tales from the Loop game in a later post.)

If you’re wondering how the game went, then read on…

Making the Kids took longer than I figured it would, but that’s pretty much true of every game I’ve ever played. (You’d think I would have learned to adjust my expectation by now.) Part of the reason is that some of the players were brand new to RPGs, and that’s definitely worth the extra time investment. I love introducing new people to gaming!

Here are the Kids my players created. 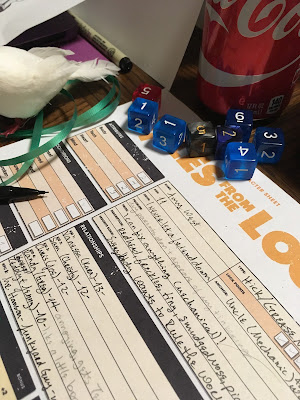 (Grease Monkey is a custom type by Max Wallinder.) 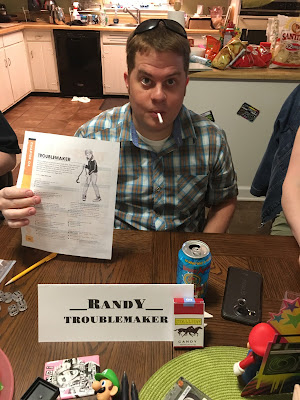 We played the first adventure in the Tales from the Loop RPG, “Summer Break and Killer Birds.” (Or, as one of the players called it, “Angry Birds.”) I’ll do my best not to spoil it here in case you’re going to play it!

As much as I wanted to try out the Swedish setting for the game, and flex my GM-ing muscles by describing a setting that’s foreign to me, I set our game in the provided American setting, Boulder City, Nevada. One reason I did this was due to player request; the other was that some of the players didn’t grow up in the 80s like I did, so I didn’t want to burden them with two different areas of unfamiliarity. 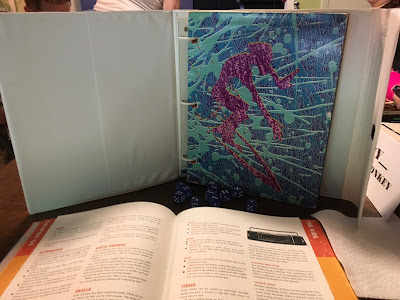 This proved to be a good test of the game’s use of dual settings, in which it provides alternate American names for every Swedish person or place it mentions. For example, in the Swedish setting the birds are spreading across northern Svartsjölandet, but accompanying orange text tells us that in the American setting, the location is Boulder Beach. And where Swedish kids talk to a scientist named Mats Tingblad, their American counterparts meet Christopher Boyd, whose details are otherwise identical. (I didn’t even catch the pun in his name until I found myself saying out loud “Mister Boyd.”)

The story involved the mystery of birds that are acting strangely—some of them talking, others acting more and more aggressive. As it turned out, this was a satisfying adventure to run for my group of animal lovers. Part of the story involves talking birds, and though as written this is only one detail out of several odd things, in our playthrough it was a major element. The Kids captured one of the birds to study it, and then had many conversations with it and grew to think of it as a pet. (When “Bird”—that’s what he called himself—referred to the group using the word “Friends” at the end of the Mystery, nearly all the players said “Awwwww!”)

The players solved the Mystery peacefully (one library break-in and two boat thefts aside), and solidified the relationships between their characters. We also learned a bit more about some NPCs, including Vanessa’s mom and Chris’s friend Brad at Radio Shack (who asked for Chris’s help repairing a discarded robot he’d found).

I liked that the adventure wasn’t too linear and allowed the players to pursue the mystery in different ways. This is true of all of the adventures in the Tales from the Loop book, and I think it’s a great model.

Character creation was great fun, and I think it will go faster next time, now that I’m more familiar with it. The system’s rules were smooth and didn’t require much reference, though I could use a quick-reference sheet with a list of the suggested Bonus Effects for each skill, because we used those a lot. (For example, when you get an extra success with Charm (as Vanessa often did), you might use it to form a lasting relationship, or leave the person frightened, or trigger other extra story elements.

One thing I need to practice is getting the Kids together, especially when there are as many as in this session. I started things out as the game suggested, giving each character a scene of Everyday Life, but this took a lot of time and still left the Kids scattered in different locations. Next time I might explicitly suggest that they aim toward ending up at the same location in the end, or I might combine some of their scenes. This way, when the events of the Mystery start, the Kids will be able to experience them together.

I also need to focus on the activities that give the Kids experience points at the end of the session. One of the rewards is for being in Trouble because of the Kid’s Problem or Relationships, and these didn’t happen this time. Another reward is for using or struggling with one’s Pride. This one, the players can manage, but I didn’t think to point it out to them in advance.

Favorite Quotes from the Game

Almost forgot…Jenny rewarded my patience in saving the first game for her. With a pack of 30-year-old gum.

2 thoughts on “My First Tales from the Loop Game”