MidSouthCon 2017 continues! If you missed the previous posts, here they are:

My third and final RPG of the con was Dungeon World. It was also the third time trying a game I’d never played–which is usually my goal! The session was called “The Great Below,” and because of the way it felt and the fact that I can’t find an adventure of that title online, I suspect our GM wrote it himself. Which impresses me, because it was a fun one.

I got to play a bard (my favorite fantasy class), and my wife was a cleric. One player was a thief (and my character’s best friend), and the other was a custom “psion” class. The adventure had a fantasy feel but in a post-apocalyptic setting–and as a fan of Numenera and Mutant Crawl Classics, I like that quite a bit. I got to make enemies attack each other, which I chose to do because that’s what my wife did to great effect in our Rifts game. Our party worked well together, and at the climax of the adventure we had control of a giant robot ape.

I forgot to take any photos, so boo on me. Try to picture a giant robot ape.

I had forgotten to bring anything to ask Keith Baker to sign on day 1, but for the rest of the con I wagged around two items. On Sunday, I spotted him again, and he kindly signed my games. (You might be thinking of pointing out to me that I could have found him in one of his panels, but I kept too busy this year playing games to make it to any of those.)

Later, in the art gallery, I met artist guest of honor Matt Stawicki at his corner of the room. He was also amazingly friendly, and added his signature to my copy of The Strange, along with those of the other creators I’ve met so far. In fact, so did Cathy Wilkins, who was there too! Double artist greatness!

I was interested to learn that Matt’s favorite world in The Strange is the biomechanical world of Ruk, because he likes the bizarre setting. 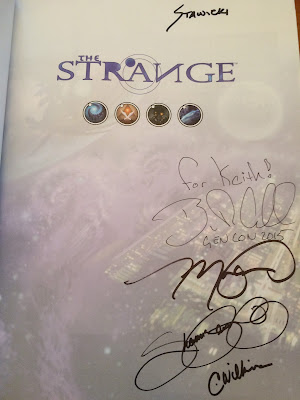 We squeezed in three more board games on Sunday, too.

Battle Sheep is a kid-friendly game in which players alternate placing land-masses and then try to fill the most space with their own sheep using simple movement rules. It was fun, and didn’t take too much brainpower. (At the time we played it, that was a plus.)

Roll For the Galaxy is a cool-looking dice-based worker placement strategy game. The players are competing to create the most powerful empire. I wanted to love this game, but my two fellow players and I couldn’t reach the top of the learning curve before frustration made at least one of us lose interest. I’d still like to give it another try sometime. I like the space setting and the use of many, many dice. 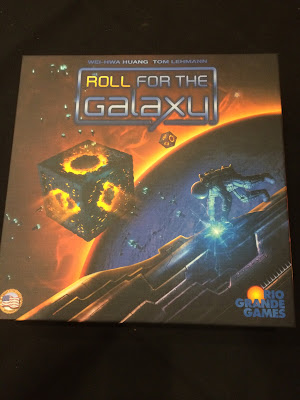 Exposed is another kid-friendly game where each player is a pickpocket. Nobody knows at the start who the other players are, and you’re trying to collect the most wallets without being identified. 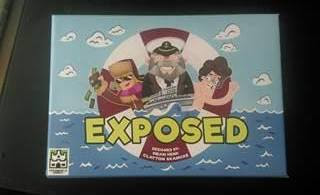 And so we come to the end of another successful MidSouthCon! I played more games than usual, and spent less than usual, so I call that win-win!