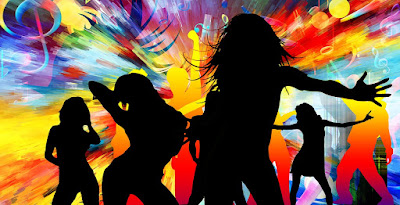 This is post number 21 in the series “31 Days of Ghostbusters,” a celebration of the franchise’s return to the big screen.

The Ghostbusters are hired to cleanse a job site under construction—a new ice skating rink—of an unusual phantasm: a man who is an obvious throwback to the 1960s or ‘70s, and is disco dancing in the middle of the ice. Our heroes are able to trap the spook with no trouble—but the next night, the spirit is back, along with a second disco-era anachronistic phantasm. Every day the Ghostbusters trap the ghosts at this site, they only add to their problems the next day. It becomes obvious that other means are required to take care of this particular infestation.

On their third extermination visit to the site, or whenever they make themselves enough of a nuisance there (such as by asking the ghosts a lot of questions about why they are there), the Ghostbusters trigger a spectral transformation. The entire site takes on its appearance from an earlier day—a discotheque, complete with lighted floors, mirrored walls, and a huge disco ball dangling from the ceiling. The place is packed with ghostly dancers! Everyone in the place is dancing (to Bee Gees music, no less) except for one: a figure who approaches the Ghostbusters.

This figure is Melvin Zebub, Satan’s nephew. Melvin explains that this is his uncle’s domain (his uncle Bill), and politely asserts that he will permit no more disruption of its daily routine.  He explains that this place is no mere job site, nor any ordinary discotheque; rather, it is a purgatory for damned souls who died while tainted by the foul touch of the Seventies. Indeed, this spectral disco is technically a part of Hell itself. Melvin shows the Ghostbusters a Purgatory Contract that proves it.

Will your Ghostbusters make a deal with the devil(‘s nephew)? Will they shoot him and find themselves damned for eternity? Or will they leave and find an easier job?

Ring My Bell (The Job and First Visit)

Reginald Falco, a prosperous-looking businessman, pays the Ghostbusters a visit. (See the Cast of Characters section for details about all listed NPCs.) After offering his card, Falco explains that he is the owner of “Ice Ice Baby,” an ice skating rink that is undergoing construction downtown. Last night, Falco saw “a glowing green man in a John Travolta suit floating across the ice.” He wants to hire the Ghostbusters to “exterminate” the apparition.

Falco has no idea why the ghost is bothering his construction crew, and doesn’t care what it wants. He just wants it gone, and is willing to pay in advance.

On the scene at “Ice Ice Baby Skating Rink,” the PCs easily find the ghost (whose name is Rodney). Rodney dances his way across the ice (a few inches above it, actually), all the while bemoaning his condition. (“Aww, I can’t stop dancin’… help me, man, I’m on fire!”) Rodney doesn’t respond to attempts to communicate. Fortunately, it turns out to be rather easy to trap him; a zap or two from a proton pack and he’s ready for trapping.

The next night, Falco gives the Ghostbusters an angry phone call, complaining that the haunting is not over. His workers spotted another ghost tonight—just before abandoning the job again. If they want to avoid either returning the money Falco paid them or being sued, the team will need to return to the skating rink and try again. (Note that if they check the containment grid, they find no trace of Rodney.)

The second visit to the skating rink is similar to the first, except that the ‘busters encounter two ghosts: Tina and, in a surprising return appearance, Rodney. Both ghosts wail about their predicament and, this time, seem to want the Ghostbusters to trap them and take them away. The team may realize that they’re dealing with at least one repeater here. They can bust both ghosts without much trouble, as before. If, instead, they refrain from shooting and question the ghosts, Rodney is more willing to interact this time. Rodney reluctantly reveals that this forced eternal dance is their punishment. If the Ghostbusters get this information out of Rodney, Melvin manifests to chastise him—skip the next two sections.

The next day, Falco calls again, irate that the Ghostbusters have not taken care of their half of the transaction. There are still ghosts at the skating rink! They must either complete the extermination or refund the money they were paid!

The third visit to the skating rink presents the PCs with three ghosts: Rodney, Tina, and Derrick. All three beg to be zapped and trapped—but they never stop dancing. Either through skillful questioning that brings the conversation around to this, or by simple impatience on Melvin’s part, the man in charge finally shows himself.

The music gradually gets louder, and more spectral disco dancers appear on (or over) the icy dance floor. The newly manifested crowd parts, and a short teenaged boy walks through and greets the PCs. He says his name is Melvin Zebub, and he is the devil’s nephew.

Melvin explains that the domain the Ghostbusters have intruded into has been claimed by his uncle, Bill (Bill Zebub), and is therefore technically a part of Hell itself. (As proof, he shows the PCs a “Purgatory Contract,” a document that is about a dozen pages of super-fine print. He will let the PCs keep a copy if they wish.)

Melvin goes on to explain that this place is no mere job site, nor any ordinary discotheque; rather, it is a purgatory for damned souls who died while tainted by the foul touch of the Seventies. Then Melvin insists that the Ghostbusters leave and stop trying to incarcerate his prisoners; he is personally in charge of their imprisonment, and has been promised by his uncle, Bill, that he will be given command of more important purgatories if he can prove he has what it takes to be the caretaker of this one.

To resolve this situation, the Ghostbusters can either:

Historical details about the Disco Inferno building can be found in a handful of paranormal tomes, such as The Big, Big Book of Haunted Buildings. The other details must be discovered in person.

“Ice Ice Baby” Skating Rink is being built on the site of a failed discotheque called Disco Inferno. Just before midnight on December 31, 1979, the Disco Inferno caught fire and burned to the ground, taking three dozen trapped, screaming disco dancers with it. According to the fire marshal’s report, the cause of the fire was “insufficient ventilation, a total lack of fire extinguishers or sprinklers, a single rusty door serving as the lone entrance and exit, and the fact that the dance floor was made of wood but lined with high-intensity disco lights.” The disco was not rebuilt.

A few months later, construction of a department store was begun, but only a few weeks into construction the project was abandoned. Similar attempts were made a few other times in the next few years, to the same end. There are no records of why these ventures were cancelled (although someone looking for them might hear some rumors from other people in the business). The site has been untouched ever since.

The skating rink is about 90% complete. Anyone checking the place out in the daytime sees a warehouse-sized building surrounding an oval ice-skating rink. The rink is already filled with ice, even though the interior of the building itself still looks mostly unfinished, showing exposed metal scaffolding stretching to the three-story-high ceiling, and lots of unfinished woodwork everywhere. There are plenty of tools and construction apparatus around: wheelbarrows, cement bags, nail guns, wooden planks, screws, etc. There is also a zamboni (one of those large ice-smoothing vehicles) parked on the ice.

A visitor at night would see much the same scene, but with a few modifications. For one thing, there is a distinct burned smell permeating the place. If one listens hard, she can hear disco music in the background. But the most blatant difference is the glowing, pulsing, red-blue-green disco lights that shine and flash up from underneath the ice. A glittery phantom disco-ball hangs down from the ceiling, right over the center of the ice. And, of course, there are up to three dozen anachronistically-dressed dancers shaking their booties on the ice (the former location of the dance floor) and in the air above it.

Falco is the owner of the haunted skating rink. He was so pleased with the price he negotiated in acquiring the former site of Disco Inferno that he didn’t bother investigating the site’s past. Everything went fine until Falco decided to start working a shift at night to speed up the construction. The night workers quit after one shift. When Falco went to visit the rink at night, he understood why. Being a rather matter-of-fact businessperson, he immediately realized whose services he needed to contract: the Ghostbusters.

The Disco-Dancing Dead, ghostly inhabitants of “Ice Ice Baby,” a.k.a. the Disco Inferno

The denizens of the Disco Inferno are all Class III focused full-torso repeaters—in other words, they were humans in life, they still look human, and trapping them is only a short-term solution; they will rematerialize in the Disco Inferno the next night.

All the Damned Dancers share the following statistics. Also, they are not too bright, they have the ability to float through the air at walking speed, and they can never stop dancing. The Dancers want to be freed from their torment; they would gladly trade their current living environment for the interior of a ghost containment unit. To that end, they will help the Ghostbusters in any way they can—or taunt the Ghostbusters into trapping them!

Melvin Zebub, nephew of Satan and manager of Disco Inferno

Mel Zebub looks to be a nice 12-year-old boy. He is short, has trim, blonde hair, blue eyes, nice posture, impeccable fingernails, and dresses in a spiffy double-breasted navy blue suit. He is extra polite, but will tolerate no mortal who wishes to cross his dear uncle, Bill (also known as Satan).