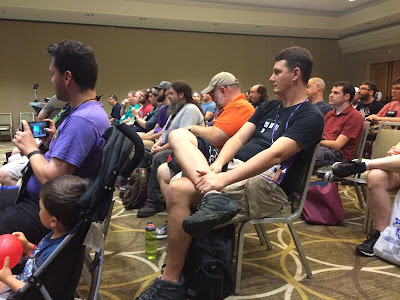 I found myself taking notes at all the seminars I attended at this year’s Gen Con, so I figured I’d put them here in case any of you are interested. They’re certainly not comprehensive notes, in some cases, because I wasn’t planning on reporting them. So I just noted the stuff I thought was especially interesting and that I didn’t already know.

Monte Cook and company talked about designing products for the cypher system. Here are a few bits of advice that stuck with me:

Monte also mentioned that 90-95% of the products from Monte Cook Games are the result of Kickstarter projects.

I wasn’t good at the note-taking at this seminar, so forgive me for not having much to share. (It was a good seminar!) 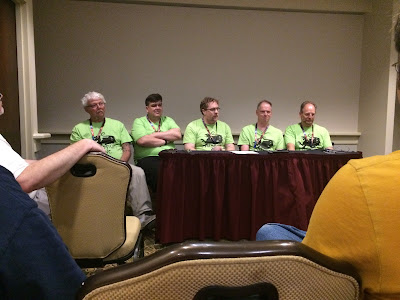 A lot of the talk involved reassurances that Chaosium has turned around its financial problems and is making things right with customers and professionals. Personally, I get the impression that this is true.

Here are a few more tidbits I caught… 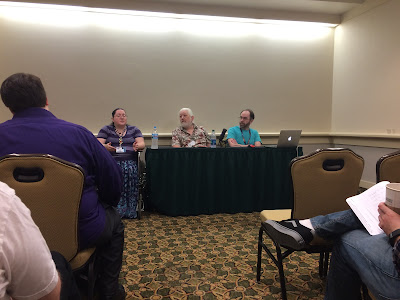 The FASA crew talked about all their product lines:

Ross and Josh talked a bit about strengthening FASA. “We’re back to being like an indy publisher,” Josh said, mentioning that all of them also have day jobs. Ross is pushing for releasing more than one book per line per year; he wants to increase that to one per quarter, and eventually one per month.

Ross said, “FASA has returned from a slumber.” 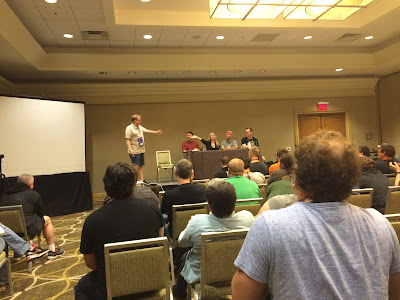 This is the second year Monte has done this amazing event. I went last year and loved it, so I was happy to drag my wife and son to it with me. (Spoiler alert: they loved it too.)

This year, Monte’s players were Bruce Cordell, Shanna Germain, Sean Reynolds, and Tom Lommel. The audience chose the following story elements, and Monte improvised an adventure around them:

I can’t do justice to this event in words, so I’ll put a video here as soon as MCG releases it. Until then, enjoy this replay of last year’s event. 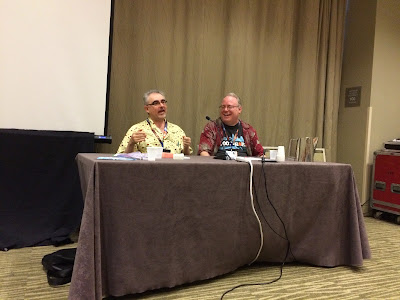 I didn’t take notes on this one because Ken and Robin recorded it for an upcoming episode of their podcast of the same name. So go listen to that, when it comes out, and pretend you’re sitting right next to me! 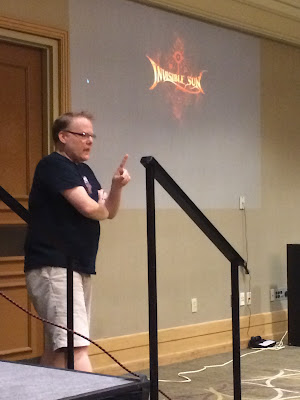 I took more notes in this one because Monte had big news: they’re releasing a new RPG called Invisible Sun. A Kickstarter for the game launches August 15, 2016, with a planned release timeframe of late 2017.

This is the introductory video MCG showed us at the start of the seminar:

And this is a video of the seminar itself:

Invisible Sun will ship in a complex-looking big black box. In addition to the game book, the box will contain “sooth cards” and apparently some kind of statue of a hand. The hand will be used in-game to hold a card. This will be a “deluxe game,” meaning not cheap. They don’t have a price yet, but mentioned that a past Monte Cook whopper, Ptolus, cost $120 ten years ago.

One thing Monte focused on was his intent to address the challenges of modern gaming with this product–such as players and GMs having busy schedules, players missing games, and players having different interaction preferences. Monte mentioned knowing players who don’t talk much at the table but enjoy the game on a deep (but quiet) level that they’re more comfortable discussing away from the table. Invisible Sun will support this in a number of ways, including its own smartphone app (in which the GM can send sooth cards to players) and the possibility of occasional one-on-one gaming.

In the world of Invisible Sun, the world that we as players know is called “Shadow.” It’s not the “real” world. The real world is hidden to most, and it’s called the “Actuality.” Sometimes, player characters feel the pull back to the shadow. This is how Invisible Sun will explain player absences–the player character has succumbed to the pull and vanished into shadow for a while. 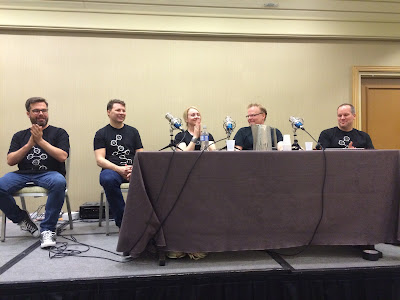 The game will also feature a “directed campaign.” Players will tell MCG when their campaign starts. After that, the Invisible Suns website will have a new monthly offering for your campaign, which will be tailored based on input provided by the group of players. MCG will even send props in the mail to players! (The audience LOVED this.)

The game’s website (designed by Gnome Stew‘s Head Gnome, John Arcadian) is at pathofsuns.com. Monte suggested we go there and look for secrets. The site will be updated daily until the Kickstarter begins (or ends, I forget which).

This is not a cypher system game, but it has similarities. Monte says that the system in Invisible Sun has a “different but similar core mechanic.” He mentioned that the system is very tailored to the setting, so it’s not designed as a general-purpose system like cypher. The game does have a GM intrusion mechanic; in Invisible Sun, they call it “complications.” These are usually associated with magic. 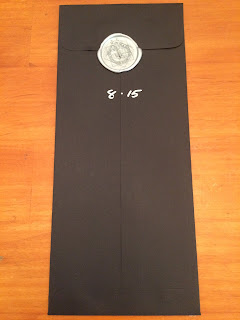 Invisible Sun’s system uses 10-sided dice. A zero is a failure. When a player is using magic, she’ll add a “magic die” (or sometimes more than one), and the magic die has a symbol in place of the zero.

Monte says you could describe the setting thusly: “It’s the Harry Potter books if they were written by Philip K. Dick.” 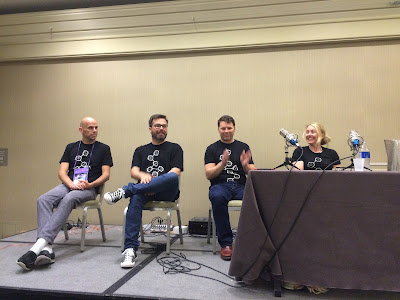 After the Invisible Sun discussion, MCG moved on to talk about products related to their cypher system line. 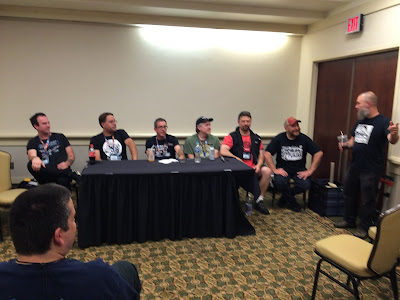 (I also spotted Rick Hull and Terry Olson in the audience.)

UPDATE: The Spellburn podcast has provided an episode featuring the audio of this seminar. You can find it here: Gencon 2016: What’s New at Goodman Games.

AND: Here’s a video of the seminar…

Cthulhu In Games, with Ken Hite 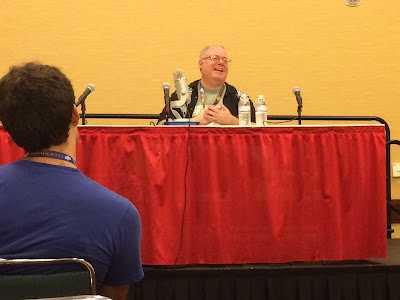 I arrived late for this one, so only have a few notes.

That’s it for the seminars I saw at Gen Con 2016. You should come with me next time!