Wanna hear about some of the games I played at GenCon this year? I hope so, ’cause here they are!

Ghostbusters: The Board Game 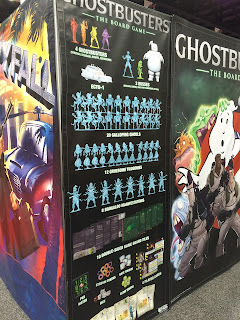 Ghostbusters is a cooperative board game with light roleplaying elements. You play as one of the Ghostbusters and undertake different missions. The one we played in the demo game involved one open ghost portal on the board, several weak ghosts, and one tougher ghost (Slimer). 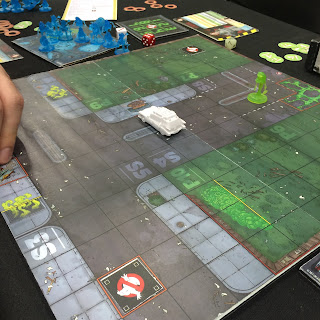 We started in the Ectomobile, and used one of our actions to disembark. We could then move, zap a ghost, clean slime off a teammate, or deposit ghost traps back in Ecto-1. Your number of actions depends on your level, and is reduced by how many times you’ve been slimed.

Each Ghostbuster has his own special abilities and a unique way of gaining XP. (Everyone gains XP by busting ghosts; these are additional paths to XP.) Playing as Ray Stantz, for example, I could gain XP by cleaning slime off my teammates. 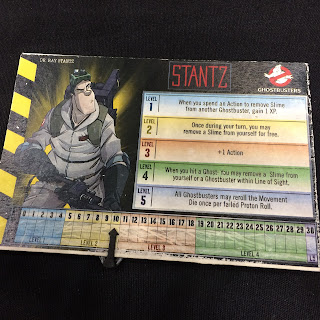 Weak ghosts can be captured by a single zap, while tougher ones require the Ghostbusters to score several hits with the containment beam (represented by putting a ringed token on the ghost in your Ghostbuster’s color). After the Ghostbusters have acted, the ghosts move. If a ghost moves through a Ghostbuster’s square, that ‘buster is slimed. Finally, we roll the special die with parapsychology symbols to see if more ghosts emerge from the portal. (I hope they call this the Zener die.) 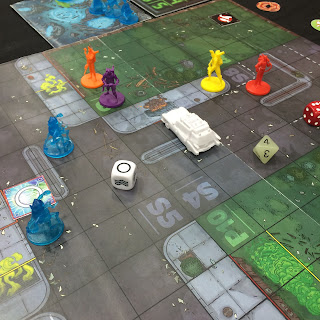 Most of the game pieces were still in prototype state during the demo, so it’s hard to tell how impressive the final product will be…except that the ghost pieces were pretty nice. 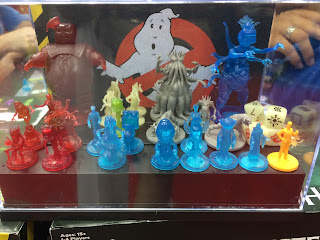 My Internet friend James Walls invited me to join his unofficial game of DCC before GenCon started. I’d never played before, and was eager to try it after reading James’s blog posts about running the game–especially his Star Wars: Stormtroopers version where his players were stormtroopers trying to take down a Jedi.

James ran The Well of Souls for the eight of us. We each controlled 3 level 0 characters. We faced ritual sacrifice, animated skeletons, a wicked puzzle we never did solve, and the most dangerous foe: each other. (James added an evil blade to the adventure to mix things up; he describes it in his blog post “The Blade of Eight Souls.”)

In general, I like how RPGs have evolved over time. I’m not one of those gamers who misses the Good Old Days when we rolled up characters randomly and played simplistic scenarios where gaining treasure was more important than roleplaying. But I found DCC charming for some reason, and after our game I had to buy my own copy. 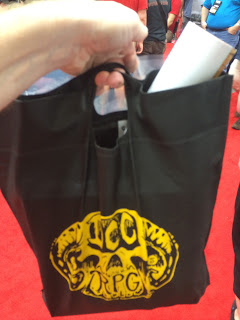 Though I’ve read The Strange and enjoyed it, I hadn’t had a chance to run or play it until now. I got to play the Mastodon adventure (available for sale now), written by Bruce Cordell and superbly run by a GM named Randy. As it turns out, none of the players in this session had played the game before either.

This session was one of those where the game was even more fun than I’d been expecting. The end of the adventure was set in the Ruk recursion (which is a sort of alternate universe), and while it was cool to read about Ruk, it was even cooler to be there. My favorite thing about The Strange is the way part of your character sheet (and therefore, your abilities) gets replaced when you travel to a different recursion.

The Strange won several ENnie awards at this GenCon (the silver awards for Best Game, Best Setting, and Best Interior Art), which made me even more glad I got to try it out. And the next day, I was fortunate enough to get my rulebook autographed by Monte, Bruce, and Shanna.

Like many things that happened at GenCon this year, this alone made my trip worthwhile.

Doctor Who: Adventures in Time and Space

I continued my streak of playing Doctor Who: Adventures in Time and Space at GenCon—this year being my second. (Granted, it’s not a long-running streak yet.) The adventure was “The Northern Knights” by Walt Ciechanowski. I won’t describe the plot of the adventure, in case you get a chance to play it. (Also, I was focusing too much on being clever to remember all the plot details.) But I wanted to say a few general things about the game.

My fellow players took the roles of the 12th Doctor, Clara, Madame Vastra, Jenny, and Strax, and I got to play Robin Hood! In my opinion, the MVP was the player controlling Strax. He was hilarious and had a great grasp on the character.

We also had a good GM (Jen). She was cosplaying as Captain Jack. What I noticed most about her was her skill at answering player questions in character. For example, a guard was delivering some expository information to us, and one of the players interrupted to ask a question. Jen kept speaking in the guard’s voice, but shifted his conversation pretty seamlessly to answer the player but still impart some extra information. She was also liberal with handing out story points, which I think made us more likely to try actions we weren’t super-skilled at.

Jen also gave us each two tiny plastic cybermats (adventure spoiler!), which cemented her as my favorite GenCon GM ever.

That’s it for this year’s games! Maybe I’ll play more next year, or maybe I’ll go even deeper into the pool of seminars and play even less. We’ll see!